Online advertising a product serving no one

It’s all bad – advertisers get duped, publishers get their websites polluted and readers endure privacy-trammelling trackers 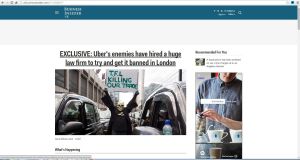 It’s hard not to look at the two deals and think, for Springer, it was rather like missing out on the glamorous, Oscar-winning movie icon and settling instead for the sassy sitcom star – not a bad result at all, but probably not what it was aiming for in an ideal world.

The 127-year-old FT is one of the most respected news publications in the world, deftly transitioning to digital with a business model based on a paywall that readers are happy to pay due to the excellence of its content.

The six-year-old Business Insider, on the other hand, is one of the most widely read news organisations in the world, a digital native publication with a business model based on getting as many eyeballs as possible on their content and the ads running alongside that content. To maximise those eyeballs, BI developed a flair for is termed “clickbait”.

The difference between the two approaches is clear. It highlights the challenges faced by media companies in developing a viable business model in the digital age – developing a readership that you monetise directly through subscriptions, or aiming for a broad audience that you monetise via advertising, or ideally some combination of the two.

It’s interesting to consider the two approaches in light of the recent debate about how publishers fund themselves in the digital era, a debate prompted by the launch of Apple’s new operating systems for mobile and the Mac, which introduced ad blocking features to the Safari browser.

This feature, though, is much more than a retread of the war on pop-up ads from a decade ago – modern programmatic advertising, as it’s known, is not just annoying, but is actively damaging the web.

As developer Marco Arment put it, “Web ads . . . run arbitrary code on your computer, which can (and usually does) collect and send data about you and your behaviour back to the advertisers and publishers . . . All of that tracking and data collection is done without your knowledge, and – critically – without your consent.”

Adding insult to injury, all those ads slow down our browsers and push up our data requirements, due to the amount of code that is being downloaded in the background to facilitate all this tracking.

The rise of ad blocking software has become a kind of proxy war about the future of the web, and as is the way with these things, it got heated – Nilay Patel, editor of technology website The Verge, went so far as to suggest ad blockers will spell the end of the web as we know it.

The Dublin-based firm PageFair, which aims to help websites survive the rise of ad blocking, revealed the scale of the problem in a recent report – it estimates the loss of global revenue due to blocked advertising at $21.8 billion this year.

But the online advertising industry has an arguably more existential problem than ad blocking – fraud. Bloomberg Businessweek recently delved into the world of online advertisiing, and it made for grisly reading. The online ad business is a den of duplicity and deceit, with automated bots designed to fake ad impressions and operators selling bogus traffic to mislead advertisers. Basically, it’s the sort of sharp practice that you inevitably get when the web’s business model is based on measuring eyeballs and ad clicks.

Online advertising, then, is a product that serves no one – advertisers get duped, publishers get their websites polluted and readers endure performance-draining, privacy-trammelling trackers.

Now, the revelation that online ad impressions are rigged should hardly be a shock to anyone who has ever been on a website. Despite having spent a good portion of the past 15 years or so online, I have intentionally clicked on an ad only a handful of times that I can remember, and once was to donate to Wikipedia.

In years to come, this debate over ad blockers may be seen as an inflection point, a moment when a more sustainable, respectful form of online advertising gets an opportunity to develop.

Which brings us circuitously back to Springer’s bet on the future. It’s safe to say both the FT and BI will both be fine in the medium term, but which one really thrives in the decades to come will depend a lot on what sort of economic model evolves to support publishing. It’s a very reductive way to consider it, but will the web ultimately be about selling ads to eyeballs, or selling content to readers.

1 Me & My Money: Noelle O’Connor, founder of TanOrganic
2 Policy failed us during the banking crisis and it’s failing us again
3 Samsung patriarch Lee Kun-hee dies at 78
4 No-deal Brexit could trigger rise in food prices, says Simon Coveney
5 Retailers accused of ‘stealing business’ from rivals by flouting restrictions
6 ‘Brexit readiness’ tool launched for Irish business amid trade talks impasse
7 How much will a Covid-19 vaccine cost?
8 Goldman Sachs in talks to take over Blanchardstown shopping centre
9 How long can Government afford to keep State pension age at 66?
10 Kerry Group still keeps lion's share of stock in the Kingdom
Real news has value SUBSCRIBE