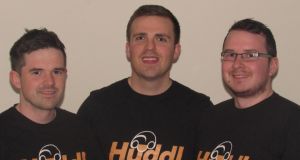 Huddl founding team (from left) Alan Farrelly, Brian O’Rourke and Sean Byrne. “When people hear about Huddl they are inevitably going to think of Uber for buses,” says O’Rourke. “But while there are similarities, we only use vetted transport operators with public service vehicle operator licenses.”

Huddl is aiming to do for private buses what Hailo did for taxis – make them more easily accessible for everyday use by commuters.

Huddl co-founder Brian O’Rourke hit on the idea while preparing for his finals in business studies at DCU.

“I had a lightbulb moment when it struck me that there should be a solution for booking private buses online,” he says. “Bus operators would benefit from the increased utilisation of their vehicles, while passengers would benefit from better access to a quality shared transport network. So it was a win-win solution.”

In a nutshell, Huddl encourages commuters dissatisfied with their current transport arrangements to send the platform a journey request. These requests are analysed and once there is sufficient interest from a particular location the system will match commuters with an approved local bus operator. Seats are guaranteed, there are no stops and O’Rourke says this method moves people 50 per cent faster than other forms of road transport.

“Traditionally, public transport has been about the provision of a relatively inflexible service with fixed routes, fixed timetables and fixed capacity, which ultimately leaves potential users with a take-it-or-leave-it scenario,” he says. “Huddl transforms this outdated method by leveraging new technologies, open source data and journey requests to create a demand-driven transportation network in which users’ needs are given the highest priority.”

The trio began developing their business model last year and have received support from the Local Enterprise Office in Longford and Enterprise Ireland in Athlone. The company, which now employs six, is participating in the National Digital Research Centre’s LaunchPad accelerator programme for start-ups. The venture has received around €100,000 in outside funding, while the founders have also put money into the business.

Huddl launched its website in March and has been getting journey requests since. So far the biggest number of enquiries has come from the Lucan area, followed by the orbital business parks.

“When people hear about Huddl they are inevitably going to think of Uber for buses,” O’Rourke adds. “But while there are similarities, we only use vetted transport operators with public service vehicle operator licenses.”

Huddl will begin testing in Dublin shortly and expects to have up to 10 routes operational within the next two months. The company is now looking for angel funding to accelerate its move into other Irish cities and ultimately into the UK and beyond.

“For now we’re concentrating on getting Dublin’s commuters to work quicker and giving them a real option to leave their cars at home,” O’Rourke says. “We see two main customer segments for Huddl. The first are commuters who are constantly getting stuck in traffic and losing valuable time while travelling to and from their workplace. The second are those who have to make double connections to get to work using current public transport.”

1 Money matters: ‘My father embarrassed us with his haggling’
2 Comcast acquires Irish cloud-based telco Blueface
3 Opioid executive admits to ‘no morals’ ahead of prison term
4 Pilita Clark: When a rude boss keeps you waiting, why not walk out?
5 Henderson Park seek €400m+ for prime Dubin office blocks
6 Are there annual limits on inheritances or gifts to a child?
7 NI house builder apologises to Harry and Meghan over adverts
8 Lack of trust blocks solutions to personal insolvency - ISI chief
9 Nestlé buys Allergan business to expand in medical nutrition
10 Irish technology company TEKenable to create 60 jobs
Real news has value SUBSCRIBE