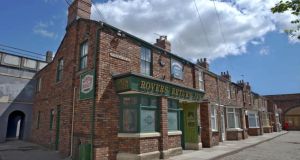 The Rovers Return pub in Coronation Street, the most-watched programme on UTV Ireland.

An episode of Coronation Street in which the inhabitants of Weatherfield cope with the aftermath of a mini-bus crash was the most-watched programme on UTV Ireland in its first month on air, attracting an average of 597,000 viewers.

The station, which launched on New Year’s Day, has recorded a 5.5 per cent share of viewing for January, according to figures from ratings body Tam Ireland and Nielsen.

This meant it was the third most-watched channel in Ireland, behind RTÉ One which had an all-day share of 20.7 per cent and TV3, which kept 8 per cent of viewing on its main channel.

UTV Ireland, which is owned by Belfast-based UTV Media plc, wants to overtake TV3 and is targeting an eventual double-digit share of viewing.

Not surprisingly, more than 40 per cent of UTV Ireland’s ratings come from Coronation Street and Emmerdale, the two soap operas it snatched from TV3 under a rights agreement with the soaps’ distributor, ITV Studios.

As a result, the channel’s share of peak-time viewing - from 6pm to midnight - is higher, at 7.2 per cent, while its share of “commercial impacts”, a better proxy for the television advertising market in the Republic, was 10.5 per cent last month.

The most-watched episode of Coronation Street, broadcast at 7.30pm on January 26th, was one in which Steve McDonald was depressed, David Platt was brattish, Norris Cole was mean-spirited and Roy Cropper was worried about everything.

More specifically, Steve blamed himself for the mini-bus crash, as injured passenger Sinead Tinker lay paralysed in her hospital bed. It attracted about 37 per cent of the audience watching television at the time.

The second most-watched programme on UTV Ireland last month was the episode of Emmerdale that preceded Coronation Street on the same night. It was viewed by 422,000 people, or 28 per cent of the available viewers.

Viewing figures An average of 491,000 viewers watched Coronation Street across the month of January, while 341,000 watched Emmerdale. UTV Ireland said the soap ratings were “in line with expectations” and that it was “very happy with the progress” of the channel to date.

Monday is the strongest day of the week for the channel, with Emmerdale and the double-helping of Coronation Street likely to have assisted the popularity of Rare Breed: A Farming Year, the third most-watched programme, which had an average of 170,000 viewers across January.

Michael Wilson, UTV Media’s managing director of television, said the figures showed that there was “room to grow, room to develop”. UTV Ireland expects to build its audience over the course of 2015 as more households retune the Saorview frequencies on their second and third television sets, and as it develops more home-produced programming.

The planned Pat Kenny-fronted chat show, made by the independent production company Coco Television, is due to air on the channel from the end of April, UTV Ireland head of channel Mary Curtis confirmed.

The broadcaster is also exploring advertiser-funded programming (AFP) commissions and applying to the Broadcasting Authority of Ireland’s Sound and Vision scheme for funding, she said.

Mr Wilson said he would not have expected the channel’s news programmes to feature in its top 10 as building their reputation was a longer-term project. “Ask me again in a couple of years’ time and I would say yes.”

The 10pm news programme typically attracts less than 60,000 viewers, while the 6.30 pm bulletin is roughly half as popular again.

“It will take time to make viewers aware that they don’t have to watch the RTÉ news at 9 o’clock, because there is an alternative at 10 o’clock,” he said.