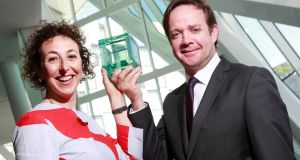 TV3 Group will relaunch its advertising sales team as Virgin Media Solutions on Monday in a move that will see the broadcaster take responsibility for growing Virgin Media’s advertising business across the UK and Ireland.

As well as selling the advertising spots for the TV3 and 3e channels and the on-demand 3Player, the reconfigured operation is expected to handle sales for video-on-demand advertising on the Virgin Media cable platform, while it will also represent Virgin’s public wifi service Bitbuzz to media agencies.

TV3 sponsors the event, which is designed to recognise advertising campaigns that have had a proven impact on sales or take-up of products and services.

It is understood the Virgin Media Solutions sales teams in both Ireland and the UK will report to TV3 Group commercial director Gavan Byrne.

TV3 was acquired last year by Virgin Media Ireland, which is part of the UK-based Virgin Media. The cable, broadband and telephony services group is a subsidiary of Liberty Global, controlled by the billionaire John Malone.

Virgin Media Ireland chief executive Tony Hanway said last week that the acquisition of TV3 in 2015 had increased the advertising expertise within the group by “100 per cent”.

Most television content continues to be consumed via traditional linear channels. However, platform owners have been both building up their range of additional on-demand services and redesigning their interfaces in a manner that encourages viewers to spend more time on home pages. This creates potential for a new advertising revenue stream for platform owners.

Liberty Global recently announced that it had signed a deal with Netflix that will see the internet television company’s app integrated on to Liberty’s set-top boxes. The Netflix app will be added to Virgin’s Irish platform in 2017, according to Virgin’s sales and marketing vice-president Paul Farrell.

The scale of the Virgin Media Solutions business is due to increase in the next few months, assuming regulators clear Virgin’s deal to buy the UTV Ireland channel from British broadcasting group ITV.

In 2015, TV3 lost advertising revenue to UTV Ireland as a result of the new channel’s then owners snapping up the Irish rights to soap operas Coronation Street and Emmerdale. As a result of the deal between Virgin and ITV, these rights will soon return to TV3 Group.