TG4 to be asked to produce ‘more radical’ funding plan 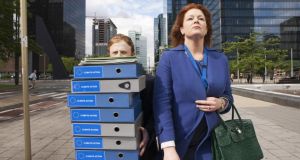 Bláthnaid Ní Chofaigh in TG4’s political comedy drama Crisis Eile. The station has been asked to revise the five-year strategy plan it submitted to the Broadcasting Authority of Ireland’s review of public media funding.

Minister for Communications Pat Rabbitte is due to meet with senior management of TG4 today to discuss its future funding.

The station has been asked to revise the five-year strategy plan it submitted to the Broadcasting Authority of Ireland’s review of public media funding after it made “an ambitious case for growth and expansion” that would require “a substantial increase” in public money, the Minister said. “Unfortunately that’s not going to be available in the present environment.”

Crowe Horwath, the accountancy firm that co-ordinated the five-year review, wrote in its report for the authority that the TG4 plan for 2013-2017 would “only be affordable if the Government agrees to a very significant loosening-up of public money”. TG4’s plan was “very much an all-or-nothing strategy, with no alternative approaches presented”, it said.

“I think the station does a very good job in terms of what its remit is and it does some innovative programming. The intention is not to cut that,” Mr Rabbitte said at a briefing last week.

The Department of Communications and the authority agreed with a recommendation from Crowe Horwath that TG4 be requested to produce a more affordable and “more radical” plan that does not depend on additional revenues but “instead explores other ways to make existing funding go further”.

The consultants suggest this might include establishing closer relationships with RTÉ and accelerating the pace of investment in on-demand services.

TG4’s stated bid to increase its audience share from 2-2.5 per cent to 3 per cent was a “challenging” aspiration, Crowe Horwath said.

The broadcaster proposed that if it increased its level of Irish-language programming by more than 300 hours over the course of the plan – spending more on sport, entertainment, lifestyle and documentaries – it could extend its audience reach by almost 100,000 people to 673,000.

Crowe Horwath described the plan as “a costly exercise” that would require a “significant uplift” of public funding in the order of €11.5 million to secure a “comparatively modest” increase in market share. The station’s audience share for 2012 was 1.85 per cent.

The consultants also highlighted other risks to its market share ambitions. “TG4’s fortunes, like those of RTÉ, are closely linked to the prospects for the DTT platform, Saorview, and therefore any failure of the platform to gain more traction with the audience may further undermine TG4’s prospects of achieving this plan,” it added.

Crowe Horwath agreed with TG4’s statement that scope for operational efficiencies at the channel was limited, given the bulk of its original output is commissioned from independent production companies.

TG4 has a total budget of about €36 million and gets 92 per cent of its funding from public sources.Broadcasting Authority chairman Bob Collins said last week that the authority recognised “the very particular circumstances and challenges” faced by TG4. “However, we would need significantly more detail from the broadcaster on how it might operate with only marginal increases in public funding.”