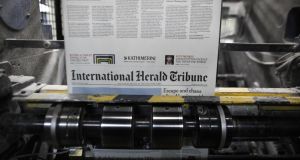 While some newspaper companies have spent recent years shifting their emphasis to other types of investments like television, The New York Times has taken a different path. It has been selling off its peripheral assets and concentrating on its flagship newspaper and website. Regional newspapers: gone. Its stakes in the Boston Red Sox and the New England Sports Network: gone. About. com: history. The Boston Globe: sold at a steep loss.

When the sale of The Globe closes this month, the company will have shed its last major outside holding and essentially stripped down to its central product - New York Times journalism. On Tuesday it will introduce The International New York Times, a central component of a stepped-up global growth strategy. The moves signal a major change for The Times, which has become smaller as it has sold off investments and trimmed staff.

After the sale of the New England Media Group - led by The Globe, Boston.com, The Worcester Telegram & Gazette and Globe Direct, a direct-mail marketing company - it will have about 3,500 employees, fewer than half the number it had two years ago and nearly a quarter of the company’s size in 2002. When the deal closes, the company will be down nearly $400 million in annual revenue from the nearly $2 billion it posted in 2012. The bigger shift for The Times has been from a news organisation that survived primarily on advertising - it generated $900 million in ad revenue last year, compared with $2 billion in 2002 - to one relying on circulation and consumer products. Many of the company’s major initiatives involve shifting from a reliance on the advertising, which for so long was its lifeblood.

The company has announced plans to introduce new subscription products, attract paying international readers and expand into video. “If we can get the combination of the new products that we’re doing and the international strategy to significantly increase consumer revenue, that could be of real significance,” Mark Thompson, The Times Co.’s president and chief executive, said in a recent interview. The plans vary from news-based products, like video, mobile apps and expanded international coverage, to tangential revenue producers like one-day conferences and cruises featuring Times reporters as expert speakers (there is currently one in Western Europe featuring two members of the paper’s Washington bureau). Thompson stressed that many of the initiatives involve and depend on using Times journalists, and building the efforts around them.

“The last thing in the world we want is the business side trying to invent journalistic product,” he said. “The future of journalism needs to be figured out in the newsroom of The New York Times, not in the ad department.” But the financial challenges that have battered the industry remain as daunting as ever, and The Times is making these changes under the impatient watch of Wall Street, which measures success in quarters, not years.

“In 2014, we are going to start looking at whether some of these investments are going to be successful,” said Alexia S. Quadrani, an analyst at JPMorgan Chase. Times executives have been clear that they see trouble spots ahead. The company still relies on its printed edition for the vast majority of its revenue. According to its second-quarter earnings report, print advertising generated about 75 per cent of total ad revenue and digital advertising less than 25 percent. On the circulation side, print subscribers generated 84 per cent of revenue. Craig Huber, an independent research analyst with Huber Research Partners, noted that even as readers migrated to digital products, The Times has reported digital advertising declines for the past six quarters.

“The uniqueness of The New York Times is a rare and unmatchable asset,” said Alan D. Mutter, a newspaper consultant who writes the Reflections of a Newsosaur blog. “But the power of the asset will not be sufficient to help it grow and thrive if the primary reliance is on print revenue.”

Still, The Times has plenty of resources to build on. The company remains profitable and in 2012 reported net income of $133 million. Digital subscriptions bought directly from The New York Times have been steadily rising and currently stand at about 700,000, and replica editions and subscriptions through e-readers add several hundred thousand more. In the past five years, through March 2013, Sunday circulation for combined print and digital editions grew by 57 percent, to 2.3 million, and Monday through Friday circulation grew by 73 percent, to 1.9 million readers, according to the Alliance for Audited Media. The company has nearly $1 billion in cash on hand. And it has diligently cut costs, trimming administrative expenses by 40 per cent since 2006. That has helped the paper avoid more significant layoffs and relieved some of the pressure from Wall Street, which in 2009 sent the company’s stock price below $4 on fears that it might be forced into bankruptcy (shares closed at $12.50 Friday).

The Times will try to capture one of the few growth areas in advertising: video content. Rebecca Howard, the general manager of the video department, said that since her arrival in March her unit had added 17 employees and given it the resources to be more self-sufficient. Howard said the department had several dozen videos in various stages of production, and was working on things like original series; long-form documentaries; a “news minute” to be shown three times a day; and videos to support important articles. The original series will be based on columns or journalists from various sections, with episodes showing on a weekly or biweekly basis. While media analysts have predicted that video advertising revenue could also soon decline, Thompson said video would contribute to the company’s broader strategy. “Video will form a part of the answer to how marketers will use small mobile devices to get powerful advertising messages across,” Thompson said.

The Times’ longer-term financial goal is to attract international paying subscribers. Thompson said that 15 million to 20 million unique international users visit The Times website monthly and about 10 per cent of The Times’ subscribers are foreign, percentages he hopes to increase.

The global strategy gets a kick-start Tuesday with the first issue of The International New York Times, re-branded from The International Herald Tribune. The effort involves a significant integration of the company’s resources around the world; the Times and International Herald Tribune staffs, long separate, have essentially merged, with reporting lines directly to New York. Top editors have been deployed from New York to offices in Paris, London and Hong Kong. Larry Ingrassia, assistant managing editor for new initiatives, said that although the paper will feature “minor design changes,” The Times was more focused on attracting more international digital subscribers, whom he described as “the political, business and cultural elite of the world.”

Still, it is not easy to get the world’s wealthy elite to pay for news. Paul Rossi, managing director of The Economist, said that the market for paying subscribers was smaller than companies think. “It’s not just reading English to the level of The Times or The Economist that takes a lot of people out of the mix,” Rossi said. “What problem does The New York Times solve for someone who is smart, Internet-savvy and living in Mumbai?” Indeed, the sensibilities of foreign governments and their citizens may not align with the newspaper’s strategy. Plans for revenue-generating foreign-language websites have had a bumpy start. A Chinese-language site started in 2012 was blocked by the Chinese government shortly after it started, after the paper printed articles embarrassing to government officials. The experience illustrated how The Times’ journalistic principles can collide with its business ambitions.

A Portuguese-language site planned for Brazil, announced a year ago, never got off the ground. The Times will also try to generate revenue by offering new types of subscription products focused on news summaries, editorials and food. The first one, expected to begin next spring, will offer access to top news. The product, referred to internally as “Need to Know,” has experienced some growing pains. The goal was to attract some 250,000 users who would pay $8 a month. After several months of work, though, it was determined that those targets were unrealistic for a phone-only app, and that the Web component needed to be substantially bolstered. The Times is also greatly expanding its live event and conference business, and in 2014 will offer roughly 20 events, in conjunction with The International New York Times, compared with one in 2011; it hopes to create a revenue stream that, while modest, will be sustainable year after year.

While these initiatives are taking people from both the business department and the newsroom, Jill Abramson, the paper’s executive editor, said she did not think the strategy had placed undue pressure on the newsroom staff and that it stood “a very good chance of success.” “I feel that the newsroom is a reliable and good partner in trying to find new ways to expand our readership,” Abramson said. “The strategy of The New York Times for as long as I have worked here has been that quality journalism pays. I think that’s been a very good basic strategy.”

An expansion of general news has some media experts concerned, since so much of it is available free on the Internet. Mutter predicts The Times will have better success with more targeted content, like the food subscription product The Times hopes to introduce in 2014. That project, in its early stages, is expected to offer subscribers access to the newspaper’s recipe database and guide cooks from recipe selection to shopping list to preparation. Like Abramson, Thompson said that he believed Times readers would still pay for high-quality news and that the company “should be working on the business model of high-quality journalism.” He added: “I cannot see a future for The New York Times Co. in saying, ‘Well, actually the way we make money is not through journalism.’”