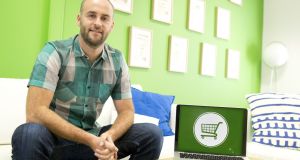 Alan Coleman, founder and chief executive of Wolfgang Digital: his marketing agency found the top performing e-commerce websites in 2015 got more than half of their traffic from mobile devices. Photograph: Dave Keegan

This traffic growth was largely driven by mobile, with mobile traffic surging 39 per cent; in the fourth quarter, it actually overtook desktop as the most popular device for e-commerce traffic.

“Black Friday”, a one-day flurry of discounts offered in the name of a tradition imported from the United States, had a noticeable impact. The top performing retailers all embraced it, says Coleman: “The big story from Q4 is the consolidation of the Black Friday phenomenon here in Ireland.”

One in two of the participating sites in the study enjoyed their highest online take of 2015 on Black Friday. In 2014, one in four sites had their best performance on the day. On average, retailers saw 116 per cent revenue growth compared with the previous Black Friday.

In the final three months of the year, dubbed the “golden quarter” by retailers, online growth appears to have far outstripped the general rise in retail sales – especially during the rainy first half of December.

Ad blockers had no impact on traffic levels on the sites in the study, despite becoming a talking point in digital media during the year, he notes. “This is due to the fact that display advertising, which is the root cause of and focus of ad blocking, is a negligible traffic source for all the top performing websites.”

In other words, display ads are not especially effective generators of e-commerce revenue anyway.

The retail and travel sites in the study sample had a combined annual revenue in excess of €100 million. They include the likes of Littlewoods Ireland, the Kilkenny Shop, Lifestyle Sports and the Guinness Storehouse.

The number of transactions rose 30 per cent last year, while average order values rose 10 per cent, with repeat purchasers tending to spend more per transaction than first-time purchasers.

Desktop accounted for a 44 per cent share of the traffic to these Irish e-commerce sites over 2015 as a whole, but this was down from 54 per cent share in 2014, while mobile’s share has increased from 29 to 39 per cent.

“Mobilegeddon” – or Google’s threat that an algorithm update would reduce traffic to websites not optimised for mobile – didn’t quite transpire, says Coleman. “Their bark was worse than their bite,” he says.

But the importance of mobile search for directing traffic means sites that haven’t invested in mobile may not escape punishment for much longer, he adds. The top performing e-commerce websites in 2015 got more than half of their traffic from mobile devices.