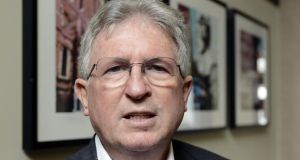 Irish TV, the channel aimed at both the diaspora and viewers in Ireland, is considering its restructuring options.

The company has been bankrolled to date by John Griffin, a London-based millionaire who sold his Addison Lee cab business for £300 million in 2014, but it is now understood to be examining options including seeking new investment. Accountancy firm KPMG is advising the company.

Co-founded by Pierce O’Reilly and Mairéad Ní Mhaoilchiaráin, the Westport-based Irish TV had been in negotiations to secure a place on the free-to-air Saorview digital terrestrial television platform operated by RTÉ subsidiary 2RN, which would substantially increase its viewership in Ireland.

Calls to Mr O’Reilly, the company’s chief executive, were not returned.

Production on several Irish TV shows has come to a halt. Claire Ronan, presenter of the programme Sligo County Matters, said on Monday that the show had ceased filming and thanked viewers for their support. “Hopefully new investors will be found soon,” Ms Ronan wrote on social-media network Twitter.

Irish TV’s management had recently lobbied for a bigger share of the proceeds of the television licence fee to be spread around the industry. Some 7 per cent of licence fee receipts currently go into the Broadcasting Authority of Ireland’s Sound & Vision scheme, which can be accessed by independent production companies.

The channel can currently be viewed on Sky channel 191, Eir channel 191 and Freesat 400, and it also had some international deals in place, including one with global telecoms giant Tata Communications. Carriage on Saorview, which is perceived as expensive by some broadcasters, would have given it a more prominent platform in many Irish homes.

The channel, which uses the tagline “local stories, global audience”, recently broadcast 21 hours of coverage from the National Ploughing Championships, where it launched an autumn schedule that included programmes such as Young, Irish and Living the Dream, Are We There Yet?, Treyvaud’s Travels on the Shannon and a show that went behind the scenes of the Rose of Tralee festival.

Irish TV began broadcasting in May 2014 under a licence issued by the UK regulator Ofcom. Since October 2014 it has been licensed by the BAI under a section 71 content contract. The section 71 licence did not give it automatic right to carriage on any particular platform, and it was not obliged to pay the broadcasting levy to the regulator.

In an interview with The Irish Times in 2014, Mr Griffin predicted Irish TV would “be worth £100 million in about two years”. The “minicab millionaire” was born in London, but moved to Mayo with his mother as a toddler, before returning to London with her to join his emigrant father at the age of nine. He said at the time he would invest £15 million in the project.