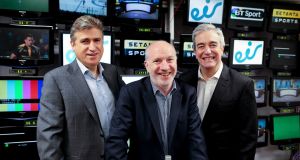 Eir is believed to have agreed to pay more than €20 million to acquire Setanta Sports, a deal the telecom group’s chief executive Richard Moat described yesterday as a “game-changer” for his business.

It is understood that the deal also involves a two-year earn- out clause that will involve Mickey O’Rourke, Setanta’s co-founder and majority shareholder, remaining with the business.

Speaking to The Irish Times yesterday, Mr O’Rourke would say only that he would stay with the business for a “couple of years”.

“I’m pretty excited about the next couple of years,” he said. “We’ve done some tremendous things [over the years] but pretty much on a shoestring, so it will be nice to have a corporate backer.

“We’re looking forward to growing the business and growing the quality of what we do, and doing some really innovative things.”

As a media merger, the deal will require approval from the Competition and Consumer Protection Commission and the Minister for Communications.

It is not expected to close before March 2016.

Eir said the deal would allow it to significantly expand its TV offering, Eir Vision, which has about 45,000 customers and offers 55 channels to subscribers. Its rivals include Virgin Media and BSkyB.

This gives Setanta exclusive rights in the Republic to the BT’s portfolio of live rights in a deal that runs to 2019.

Mr Moat declined to comment on whether Setanta would be renamed under the Eir brand, which replaced the Eircom name in September at a reported cost of €16 million.

“We’ve clearly put a lot into the new branding,” he said.

“We’d like to use the strengths of both of them for the time being.”

He said the Setanta purchase would transform its TV offering and was an “important first step for us in television content ownership”.

“Up till now we’ve been selling TV based on price, and this gives us a new, unique point of difference so we can offer value and variety of content to Irish consumers for the first time.

“That’s going to help us in terms of monetising the huge investment we’ve made in high- speed broadband, which you need to use our IPTV service. If we’ve got better content then I think people will buy more broadband. Those are the reasons why we think it was important.”

On the question of whether the Setanta acquisition was another piece in the jigsaw for Eir on the road towards another shot at a stock market IPO, Mr Moat said: “In its very widest sense, anything which adds value to the business could help a future flotation at some point in time, but there is no intention to target a flotation right now.

“They’ve got a long-term investment horizon and we’re looking forward to working with them for years to come and we’ll see what happens down the road.”