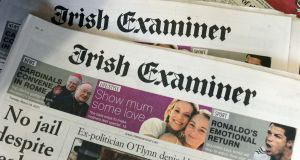 More than 550 jobs are at stake in a bitter legal dispute over alleged trespass at the Cork offices from which the Irish Examiner and Evening Echo newspapers are now operating following restructuring of the Thomas Crosbie media group.Photograph: Eric Luke / THE IRISH TIMES

More than 550 jobs are at stake in a bitter legal dispute over alleged trespass at the Cork offices from which the Irish Examiner and Evening Echo newspapers are now operating following restructuring of the Thomas Crosbie media group.

Kilquane Ltd, the landlord of the City Quarter Building at Lapps Quay, Cork, will next month apply to the Commercial Court for injunctions restraining Irish Examiner Ltd (IEL) occupying offices governed by leases between Kilquane and Examiner Publications Cork Ltd (in receivership).

Kilquane has “absolutely no interest” in dealing with IEL given its behaviour to date and “cynical” attitude concerning contractual and leasehold obligations, a solicitor for Kilquane said. The property at issue is valued at some €7.32 million with estimated €650,000 per year rental value.

Kilquane claims Examiner Publications Cork Ltd (EPC) entered in 2008 into 20 year leases, dating from 2006, with Kilquane to occupy parts of the building over three floors and was not entitled to assign leases to IEL as part of the TCH restructuring. That restructuring included EPC and various TCH companies being placed in receivership last month.

Kilquane also claims default for more than two years on rent payments with some €900,000 in outstanding arrears. Separate proceedings have been taken over the rent issues.

Michael Howard SC, for Kilquane, told Mr Justice Peter Kelly yesterday his client was not interested in mediation as IEL was trespassing on the premises and rent payments had been “unilaterally halved” for some two years. The lease was between Kilquane and TCH and could not and should not have been assigned without Kilquane’s consent, he said.

Any risk to jobs was created entirely as a result of the restrucuturing and the ignoring of obligations to Kilquane, cousnel said.

The court heard IEL’s solicitors wrote to Kilquane las month stating it wished to agree a new tenancy and was willing to pay, as an interim measure, some 50 per cent of rent due under the leases.

Kilquane refused to meet and said it would not accept a cheque from IEL for some €100,000 to cover rent from March to May 2013.

IEL was prepared to ignore the leases and sought to pressurise Kilquane into granting new leases at much reduced rent “by blithely entering into possession of the premises” and using them for its own commercial purposes “in blatant disregard” of Kilquane’s property rights and comemrcial interests, Kilquane claimed.

Una Tighe, for IEL, urged mediation of the dispute, stressing 550 jobs are involved and a business continues to operate from the premises. The new company operating the Irish Examiner is a highly regarded business achieving significant cost savings and it expects to be profitable by the end of this year, she said.

It was in both sides’ interests that any transfer of the property should be effected in an orderly fashion, she said.

Mr Justice Kelly remarked what has happened to date had been “anything but an orderly transfer of property” and asked what entitlement had the occupier of the premises to be there.

Ms Tighe said her client was in possession with the agreement of the tenant althought there was an issue with the landlord. There should be mediation, the dispute should be resolved and no indication had been given any other tenant was lined up, she added.

Mr Justice Kelly said, while restrucurings are commonplace in this climate, none allow the laws of landlord and tenant and constitutional property rights to be set aside.

In the circumstances, he was not surprised Kilquane had said it was not interested in mediation and just wanted to recover possession. Kilquane regarded IEl as a trespasser and, while some might see that as “a blinkered notion”, restructuring did not give a licence to trespass.

While he personally was a strong supporter of mediation, both sides had to agree to enter that process, he said. If one side would not engage, it was pointless.

He made orders for the fast-tracking of the proceedings in the Commercial Court and listed the injunction application for hearing on May 8th. Issues related to the rent arrears were also adjourned to that date.