Dispute between Irish Life and Arcadia admitted to Commercial Court 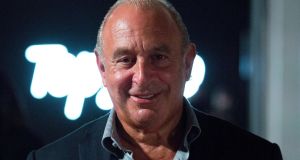 Irish Life has brought proceedings against Philip Green’s Arcadia Group over a lease entered into in 1987 in respect of premises on Patrick Street in Cork. Photograph: Isabel Infantes/PA Wire

A dispute between Irish Life and the UK-based fashion retail group run by Philip Green over the purported termination of a lease for a premises in Cork city has been admitted to the Commercial Court.

Irish Life Assurance Plc has brought the proceedings against Green’s Arcadia Group Ltd over a lease entered into in 1987 in respect of premises owned by Irish Life located at 101 Patrick Street in Cork.

Earlier this year Green’s Arcadia, which operates well-known fashion brands Burton, Dorothy Perkins, Evans, Miss Selfridge, Topman, Topshop and Wallis, entered into a process in the UK called a company voluntary arrangement (CVA), which is similar to the examinership process in Ireland.

Arcadia claims that arising out of the CVA, which was approved by a majority of the group’s shareholders and creditors, the lease in respect of the Cork premise has been terminated.

This is disputed by Irish Life, which also claims that the rent payable between July of this year and when the lease was due to end in 2022 is €1.95 million.

In its action, Irish Life seeks declarations including that the lease dated October 7th, 1987, in respect of the property continues in full force and effect.

It also seeks a declaration that the purported termination of the lease by Arcadia on June 12th, 2019, using a CVA is not entitled to be recognised in Ireland.

Irish Life further seeks orders from the court that the lease be specifically performed, as well as judgment in respect of all outstanding rent it claims is due, and damages.

The action was admitted to the Commercial Court list by Mr Justice Robert Haughton.

The judge was told the application for entry was on consent, but there would be an issue between the parties whether the dispute should be heard by the Irish court, or before the high court of England and Wales.

The case was adjourned for a week.