As new screens are launched in train stations, cinema lobbies and shopping centres, advertisers are stepping up their investment in digital out-of-home formats, although traditional billboards remain popular 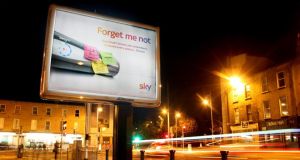 JCDecaux Metropole digital out-of-home ad format: Sky is one of the biggest advertisers spending money on this medium

Digital advertising formats were the standout performer in the out-of-home sector last year, with their share of media spend in the market growing from 5 per cent to 8 per cent following the launch of new screens in train stations and cinema lobby areas.

“These new formats are strategically located in high-footfall environments and, as a result, deliver a premium audience,” out-of-home media agency Kinetic notes in its review of 2014.

More locations are “in the pipeline”, it says, with a network of screens expected to be added to Tesco stores.

“However, advertisers remain committed to the traditional large format, which accounted for 32 per cent of total spend.”

Recession has delayed innovation in the Irish out-of-home market because digital infrastructure requires significant upfront investment that media owners were slow to make at a time when the market was shrinking. In the UK, one of the most advanced digital advertising markets in the world, digital formats account for almost 30 per cent of the out-of-home market.

Clear Channel Ireland now has more than 2,000 bus shelters equipped with NFC tags, while shopper marketing group Visualise has introduced the technology to its portfolio of supermarket trolleys.

Core Media, meanwhile, expects a “sustained comeback” in the out-of-home sector, with a 7 per cent growth in spend this year driven in part by the “explosion of digital screens”. Its analysis suggests the share of digital in the out-of-home market across the Republic and Northern Ireland will grow from 9 per cent last year to 12 per cent this year.

While traditional billboard site owners will try to prolong their lifespan with HD printing and illumination, Core Media argues these older formats “must be prioritised for conversion to digital at the earliest opportunity”.

The Irish industry is eagerly anticipating the advent of real-time advertising that can be automatically updated and facial recognition technology that would allow for personalisation in out-of-home campaigns.