DAA, Barry’s Tea and The Irish Times among Allianz Business to Arts winners 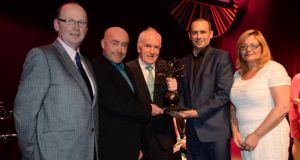 The Dublin Airport Authority, Barry’s Tea, Bord Gáis Energy, Accenture and The Irish Times were among the winners at this year’s Allianz Business to Arts awards.

Bord Gáis Energy won the award for best large sponsorship (value of more than €25,000) for its naming rights deal on the Bord Gáis Energy Theatre, while management consultancy firm Accenture won in the small sponsorship category for its association with the LGBT film festival Gaze.

The award for best long-term partnership went to the DAA and the Dublin Theatre Festival for the DAA’s sponsorship of the festival since 2007, and specifically for its Dubliners@DublinAirport campaign, which highlighted the festival’s 2012 production of James Joyce’s Dubliners.

The award for best use of creativity in the community was won by animation company Brown Bag Films, The Irish Times and Fighting Words, the non-profit creative writing organisation founded by Roddy Doyle.

There was a record number of entries for this year’s awards, featuring projects worth almost €7.5 million.

Minister of ArtsJimmy Deenihan was guest of honour at the ceremony in the Bord Gáis Energy Theatre in Dublin last night.

Mr Deenihan described the awards, which are in their 22nd year, as “an important date in the arts calendar”.

Brexit, coronavirus and bark beetle pose challenges for Coillte 30 May
Lioncor gets planning permission for ‘house of Europe’ project 30 May
Tobacco makers still trying to make a mint from Irish menthol market 30 May
Minister calls on EU to act against tobacco firms ‘undermining’ menthol ban in Ireland 30 May
Ryanair expects air fares to fall when flights take off again 29 May
Search executive
jobs on irishtimes.com