Bigger is better for television screens 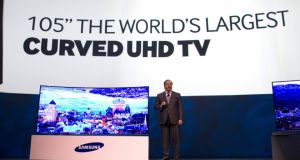 Our living rooms may not be getting any roomier, but Irish householders continue to opt for bigger television screens, research by Kantar Media shows.

In 2011, about 400,000 homes had a main television screen size of 40 inches or more, but by last year this figure had grown by almost 60 per cent to 629,000 homes. The trend for even more dominant screens, quoted in a report by television ratings body Tam Ireland, doesn’t seem likely to abate any time soon.

The “standard” television screen size sold by electrical retailers has jumped from 32 inches to 46 inches over the past few years, British retailer John Lewis noted recently, while the growth area in the global television market – which is declining overall – is now at 50-inch screens and above.

Inflation in screen sizes has been driven by technological advances that have in turn brought down the price of larger sets.

In 1999, a “Flatron” plasma screen manufactured by South Korean company LG was billed as the largest television screen in the world at just 60 inches, and went on sale the following year for more than $8,000. Today, 60-inch smart TVs retail for less than €2,000, and most electrical retailers stock 75-inch models.

At the Consumer Electronics Show in Las Vegas in January, Samsung unveiled both a 110-inch ultra-high-definition (UHD) model and a 105-inch curved UHD set.

Sometimes referred to as 4K technology, UHD has a picture resolution that is four times higher than the full-HD standard, and shipments of UHD sets are forecast to reach 13 million TVs this year, or about 6 per cent of the overall market. This is up from two million last year, according to research firm IHS Technology.

But even if prices for UHD sets come down from their current premium tags, consumer take-up of the technology may be kept in check by a lack of available UHD content.

Although the World Cup in Brazil next month is expected to be a driver of UHD sales, only three of the matches (one of which will be the final) will actually be filmed in UHD.

This is because few broadcasters have the ability to transmit the large amount of data required for UHD over conventional broadcasting satellites.

So-called “over-the-top” services consumed on television sets are moving to UHD, however, with Netflix offering the second series of House of Cards at 4K streaming quality. The industry also says UHD sets above 50 inches offer a more “readable” picture than similarly sized full-HD TVs, even if they are not showing UHD content.

When viewed close-up, as large television screens inevitably are in all but the most palatial of living rooms, the UHD picture is crisper and has fewer noticeable flaws than its predecessors.

Despite the proliferation of laptops, tablets and mobiles, the television set is still the main way that Irish people consume audio-visual content, with 193 minutes spent on a TV set each day, according to a recent Ipsos MRBI survey conducted for Tam Ireland.

This accounts for 84 per cent of total audio-visual viewing, while 93 per cent of all viewing takes place in the home.