Are you sitting comfortably for the TV season ahead?

At the time of writing, nothing is confirmed except the couples dressed as giant animals 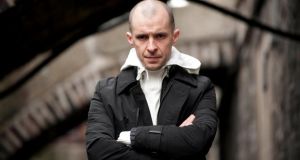 The nights, like the football transfer window, are closing in fast, signalling that it’s time to give up on life and get a Netflix subscription. Alternatively, RTÉ, TV3, TG4 and newbie UTV Ireland have each just taken their turn to hint at the small-screen diversions they’ll be offering viewers of linear television in the dark months ahead.

And yet there was just so much that they held back. So never mind what the promo ads or the listings magazines claim. Here, for the first time, is the totally comprehensive rundown of the television season as it is likely to unfold between now and the end of the school year.

Smart publicity “mistake”: after witnessing the Downton Abbey “bottled water on the mantelpiece” photograph go viral, the makers of Haughey-era RTÉ political drama Charlie cunningly photoshop a smartphone into the trailer in a bid for similar hype-generation.

Love/Hate goes down a bomb: weary of dispatching one character at a time, the next series goes a bit “explodey-wodey”, as they say in Doctor Who, with an explosive device hidden in Trish’s shopping ironically killing everyone except Trish.

Irish Gogglebox debuts: the new TV3 show – in which a carefully selected bunch of real humans comment on a range of carefully selected television shows – reaches its creative peak when the cast have their say on the marriage of UTV Ireland and Pat Kenny.

The day in politics: RTÉ axes Oireachtas Report, and when TDs complain bitterly about the consequent damage to democracy the broadcaster explains it needs the money to cover next year’s 37 referendums.

Silence falls at IFTA: after the sound fiasco at the last Irish Film and Television Awards, attendees at the 2015 ceremony are warned not to make any noise. Gongs are collected in a deathly silence that leaves many of the winning actors paranoid that the whole event is an elaborate exercise in sarcasm.

Bowman boost: RTÉ finally notices that whenever John Bowman appears on television, people tweet “I wish John Bowman was on television more often”, and they beg him and his salient points to return to Montrose forever – or at least until after the next election.

Only a game show: the “Win Back Your Licence Fee Quiz” from 2fm’s Chris & Ciara show attracts the wrong sort of political attention when it is adapted for television and given a peak-time slot on RTÉ Two.

Winterfell blues: there’s a marketing crisis for the Northern Ireland Tourist Board after it runs out of journalists to send on the Game of Thrones locations tour and tries to design a tourism promotion plan based on The Fall instead.

Soap residue: TV3 soap opera Red Rock, which revolves around a Garda station in a harbour town, is deemed a critical success after the writers guarantee that no suspicious packages or human remains will be washed up ashore and discovered by children playing.

Ratings battle: competition between TV3 and UTV Ireland intensifies to the point where viewers of the daytime schedules are forced to make an impossible choice between TV3’s showing of Judge Judy and UTV’s repeat of Midsomer Murders.

Period pieces: there is unfortunate cultural fallout from the broadcast of Charlie as some viewers get confused and think combovers must be cool again.

Friday night animation project: it transpires that the main rationale for January’s Late Late Show set redesign is to find a way to make the live studio audience seem, well, alive, or at least in possession of movable heads.

Double-jobbing: as part of a Montrose efficiency scheme, RTÉ presenters are told they will be contractually obliged to produce skits satirising themselves for use on Irish Pictorial Weekly, the Republic of Telly, The Mario Rosenstock Show and/or Callan’s Kicks.

The really wild show: Sky 1 broadcasts a game show called Wild Things in which couples negotiate a woodland obstacle course while dressed as giant squirrels, badgers or foxes. Oh. . . This one is actually, genuinely happening.

Death watch: RTÉ religious affairs documentary Guess Who’s Dead, an exploration of Ireland’s fascination with death notices presented by Ardal O’Hanlon (again a real programme), is such a hit that it is extended into a recurring show incorporating live Twitter feeds.

Time for reflection: a new sequence of images filmed to accompany the Angelus bongs is hailed as a modern masterpiece as the middle-distance stares of old are replaced by a series of people weeping uncontrollably and without respite.