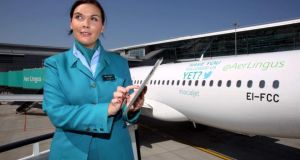 This summer, thousands of travellers will fly on the Aer Lingus “#socialjet”, aka EI-FCC, a plane emblazoned with the questions “Have you liked us yet?” and “Have you followed us yet?” on opposite sides of the fuselage.

The aircraft is a cloud-destined promotion for Aer Lingus’s recent embrace of Facebook and Twitter. “It’s a flying billboard,” says Declan Kearney, director of communications for Aer Lingus.

EI-FCC is a short-term lease that will fly four or five times a day as part of the Aer Lingus fleet to help it cater for higher summer flight demand.

As it costs around €100,000 to put full livery on an aircraft – and a similar sum to remove it – aircraft that are leased for short periods are usually flown as “white tails” or with easily removed decals (stickers) applied.

Even subtle changes to the appearance of aircraft can generate high worldwide interest. “There is a massive community of people who photograph aircraft all the time,” says Kearney.

In 2011, when two new aircraft were liveried in Aer Lingus’s 1960s design to coincide with the company’s 75th anniversary, thousands of pictures were taken and shared by plane-spotters – a Google search for “Aer Lingus retro jet” yields more than 20,000 results.

‘Emotional attachment’
The potential use of aircraft as an outdoor advertising medium has not been lost on the industry. Last week, Ryanair invited advertisers to put their brand on any of four different locations on its aircraft, including the front fuselage.

It “probably wouldn’t fit with the overall brand” for Aer Lingus to use its fleet in this way, says Kearney. In an industry dominated by red, white and blue livery, the flag-carrier’s green hues stand out at overseas airport gates, and can be a welcome sight for Irish air passengers far from home. “There is an emotional attachment to the traditional livery of our aircraft,” he says.

So when the blank canvas of EI-FCC joined its fleet, it seemed like a good time to highlight its social media presence using decals. The company did not become active on Twitter until May this year and only launched its Facebook page last December.

The wait was the result of concerns that it might not have sufficient human resources to cope with the regular spikes in social media queries that airlines attract, Kearney says.

“Our strategy on social media is to serve first and sell second. You can’t always deal with highly complex matters on Twitter, but you can give people links to where they can find more information or you can deal with queries using private messaging.”

During weather emergencies or other times when high numbers of flights are cancelled or delayed, one more traditional form of media remains essential for communicating with passengers.