Kim Phuc (centre), with her clothes torn off, flees with other South Vietnamese children after a misdirected aerial napalm attack on suspected Viet Cong on June 8th, 1972. Photograph: AP/Nick Ut

Facebook has reversed its decision to remove Nick Ut’s famous The Terror of War photograph taken during the Vietnam War after an online attack from the Norwegian prime minister, who said the photo had “shaped world history”.

Facebook initially said the picture, which depicts a then 9-year-old naked girl running away after a napalm attack, violated its community standards against nudity.

“In this case, we recognise the history and global importance of this image in documenting a particular moment in time,” the company said in a statement.

Facebook had earlier deleted a post by the Norwegian prime minister in a row over the website’s decision to remove content featuring the Pulitzer-prize winning “napalm girl” photograph.

Erna Solberg, the Conservative prime minister, called on Facebook to “review its editing policy” after it deleted her post voicing support for a Norwegian newspaper that had inadvertently fallen foul of the social media’s guidelines.

Ms Solberg was one of a string of Norwegian politicians who shared the iconic image after Facebook deleted a post from Tom Egeland, a writer who had included the picture by Nick Ut, as one of seven photographs he said had “changed the history of warfare”.

Egeland was subsequently suspended from Facebook, and his standoff with the social media giant was reported by the daily newspaper Aftenposten, which used the same image in its reporting of the story and itself came under pressure from Facebook to delete the picture.

Aftenposten’s editor-in-chief, Espen Egil Hansen, said the newspaper had received a message from Facebook asking it to “either remove or pixelise” the photograph.

He refused and wrote an open letter to Mark Zuckerberg saying he was failing to live up to his role as “the world’s most powerful editor”. 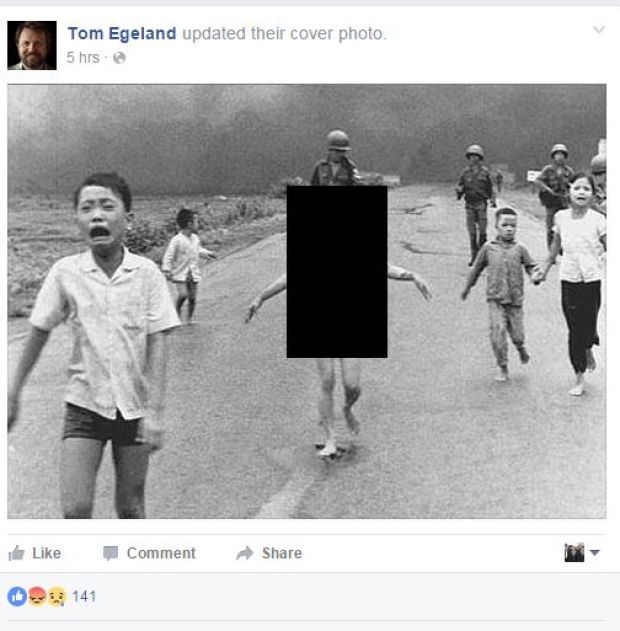 In her intervention on Friday, the Norwegian prime minister wrote that the photograph, entitled The Terror of War and featuring a naked 9-year-old Kim Phuc running away from a napalm attack, had “shaped world history”.

Ms Solberg added: “I appreciate the work Facebook and other media do to stop content and pictures showing abuse and violence ... But Facebook is wrong when they censor such images.”

Before being deleted by Facebook this morning, her post went on to say the website’s decision “helps to curb freedom of expression”, adding: “I say no to this form of censorship.”

Ms Solberg said: “It is highly regrettable that Facebook has removed a post from my Facebook page. What they achieve by removing such images, good as the intentions may be, is to edit our common history. I wish today’s children will also have the opportunity to see and learn from historical mistakes and events. This is important.

“I hope Facebook uses this opportunity to review its editing policy, and assumes the responsibility a large company managing a broad communication platform should take.”

On the decision to delete the prime minister’s post, Mr Hansen told the Guardian: “At least they don’t discriminate, we have to give them credit for that.”

The chief executive of Aftenposten’s publisher, Schibsted Media Group, said Facebook had tried to stop the newspaper publishing “one of the most important photos of our time”.

Rolv Erik Ryssdal added: “It is not acceptable. Facebook’s censorship is an attack on the freedom of expression - and therefore on democracy.”

“Schibsted Media Group believes it is very important that the Norwegian media industry now gather to create an independent alternative to the American giants’ enormous power in the advertising market,” he said.

“We are talking about the prerequisite for independent journalism. Facebook’s treatment of Aftenposten is another proof of the importance of this.”

A Facebook spokeswoman then said: “While we recognise that this photo is iconic, it’s difficult to create a distinction between allowing a photograph of a nude child in one instance and not others. We try to find the right balance between enabling people to express themselves while maintaining a safe and respectful experience for our global community.

“Our solutions won’t always be perfect, but we will continue to try to improve our policies and the ways in which we apply them.”

The posts that had been deleted would firstly have been reported by a user to Facebook’s community standards team, who would then have made the decision to remove them, rather than being removed automatically by an algorithm.

3:15 Remote working a deal breaker for close to half of job candidates

As reopening rolls on, there is a hidden boom in the Irish jobs market