European markets lifted by rallies in oil and commodities 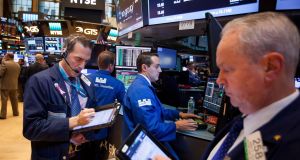 Rallies in oil and commodities boosted markets on Monday but investors remained cautious about the possible impact of the looming Italian constitutional referendum and longer-term European Central Bank policies.

The Irish market underperformed as a number of leading stocks lost ground during the day.

Weakness in bookmaker Ladbrokes Coral, which fell more than 2 per cent in London, fed through to the sector generally, knocking 1.27 per cent off Irish betting giant, Paddy Power Betfair’s price, which closed at €101.

Software specialist Datalex tumbled 3.43 per cent to close at €3.38. Traders acknowledged that it traded at a higher level for much of the day, although it was almost 6 per cent off at one point.

Irish Residential Properties REIT, one of the biggest owners of flats in Dublin, dropped 1.72 per cent to €1.137. Traders noted that investors have been selling all three in recent weeks.

Home lender Permanent TSB Holdings fell sharply, ending the day 5.11 per cent down at €2.636, wiping out gains made during a strong day on Friday when it closed almost 4 per cent ahead. Bank of Ireland was down 1.38 per cent at 21.5 cent.

Irish convenience foods group Greencore lost 5.6 per cent to close at 290.8 pence sterling. The stock gained about 15 per cent last week after announcing that it was buying US rival Peacock.

Another US company in the same sector, Tyson Foods, reported poorer results than expected.

Recently-merged bookmaker Ladbrokes Coral, which has an extensive Irish business, was down 2.09 per cent at 122.1p.

Rising copper prices pushed mining stocks to the top of the blue chip index, with shares including Randgold Resources rising 215p to 6,005p, Fresnillo up 41p to 1,330p, and Anglo American rising 33p to 1,122.5p.

Diageo fell 24p to 2,005p on news that the drinks giant will be hit by strikes in the run-up to Christmas after workers voted for industrial action over cuts to their pensions.

ITV was the worst performer on the FTSE 100, down 4.4p to 165.6p, after going ex-dividend – which means new buyers no longer qualified for the latest dividend payment.

Away from the top tier, Mitie shares plunged 20p to 190p after the company swung to a £100.4 million half-year loss and again issued a profit warning as increased economic uncertainty and higher staff costs hit the balance sheet.

A rally in commodity producers helped European equities erase declines, posting their longest streak of intraday fluctuations in more than three years.The Stoxx Europe 600 Index climbed 0.3 per cent at 3:16 pm in London, reversing a slide of as much as 0.8 per cent, amid gains in energy producers and miners as commodities advanced. Across Europe, the French Cac 40 and German Dax closed higher, up 0.56 per cent and 0.19 per cent, respectively.

European stocks have been trading in a tight range most of the year and remain below their level from before the UK secession referendum.

Investors are turning their focus to the region’s political risks ahead, while the recent rise in government-bond yields is making equities less attractive, according to Peter Dixon, an economist at Commerzbank AG in London.

“The Italian referendum in two weeks’ time and concern about the future of ECB policy are starting to rise in people’s agenda,” he said.

The energy sector surged 1.8 per cent to a 16-month high, dominating the gainers among the 11 major S&P sectors. Chevron and Exxon rose 1 per cent each and were the top influences.

Among tech gainers was LifeLock, which surged 15.2 per cent after Symantec said it would buy the identity theft protection company for $2.3 billion. Symantec rose 4.7 per cent.

Applied Micro Circuits jumped nearly 12 per cent after Macom Tech said it would buy its fellow chipmaker for $770 million.

Macom was off 4.1 per cent. Tyson Foods’ 14.7 per cent slump led the losers on the S&P after the meat processor reported a lower-than-expected profit and said its chief executive would step down.

1 State subsidises public sector retirees to cover gap until State pension
2 Who are Ireland’s 17 billionaires?
3 My father in a nursing home wants to gift me his house
4 Are there annual limits on inheritances or gifts to a child?
5 Trump holds America up as ‘example for the world’
6 Countries that fail to attract immigrants will lose out – Microsoft chief
7 Nama lends Cosgraves €15m to fund huge apartment development
8 Cubic Telecom raises more than €11 million in funding
9 Q&A: Why has the pension age question suddenly become an election issue?
10 Help, I’ve no PRSI stamps – can I still get a pension?
Real news has value SUBSCRIBE