Volkswagen has admitted up to 11 million of its vehicles worldwide have been fitted with software to deceive US emissions tests. Assistant business editor Michael McAleer explains what happened and what it means for motorists and manufacturers. Video footage: Getty Images 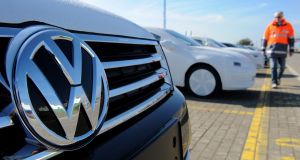 A new Volkswagen (VW) car is seen in the foreground as new cars of the Volkswagen group are parked ready for shipping at the car terminal of the port of Bremerhaven. Photograph: Getty 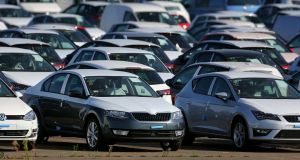 German chancellor Angela Merkel told a German radio station the emissions scandal around German carmaker Volkswagen was “drastic” but the damage was not so great that Germany was no longer deemed a good place to do business.

“I believe the reputation of the German economy and the trust in the German economy has not been shaken by this to the extent that we are no longer considered a good business location,” she told Deutschlandfunk, according to the text of an interview due to be broadcast later on Sunday.

She said she hoped Volkswagen would quickly create transparency and sort things out.

Earlier, the head of the European Parliament told German regional newspapers the emissions scandal at Volkswagen (VW) would hit the German economy hard but Europe’s biggest carmaker was likely to survive the crisis.

Germany’s finance and economy ministers have played down the risk of a broader economic danger for Germany from the scandal.

“It’s a heavy blow for the German economy as a whole,” Martin Schulz, a German Social Democrat, was quoted as saying by the newspapers.

“It’s hard to believe what was done there negligently and possibly even with criminal energy. But I believe that Volkswagen is a strong company that has every chance of surviving the crisis,” he said.

VW has set aside €6.5 billion to help cover the cost of the scandal, but some analysts think the final bill could be much higher.

VW has said it will have to refit up to 11 million cars and vans containing illegal software.

The car industry is crucial for Germany, Europe’s largest economy, where the likes of BMW, Daimler and Volkswagen employ more than 750,000 people.

German newspaper Welt am Sonntag cited Hans Dieter Poetsch, Volkswagen’s incoming chairman as saying the scandal is a threat to the firm’s viability albeit a surmountable one.

The scandal relates to an admission by VW that software code designed to cheat US emissions tests for nitrogen oxide (NOx), a harmful air pollutant, was included in the engine management system of its EA189 diesel engine.

The engine in question came in three versions: 1.2-litre, 1.6-litre and 2-litre. These featured in Audi, Seat, Skoda and Volkswagen vehicles between 2008 and 2014. Germany’s transport minister says it also manipulated tests in Europe.

In total 11 million cars worldwide are affected. According to the US Environmental Protection Agency, vehicles fitted with the cheating software had real world emission levels up to 40 times higher than what was being recorded in its tests.

It said 34,387 Volkswagen passenger cars, 16,484 Audis, 16,004 Skodas, 4,365 Seats, and 8,107 VW commercial vehicles are affected. These are vehicles sold through the firm’s authorised dealer network in Ireland. In addition it estimates up to 30,000 used imports currently on Irish roads may also be affected, though it says this “is still under clarification”.