Volkswagen hopes to avoid emissions court battle in US

Carmaker offering US drivers $5,000 and a free engine fix 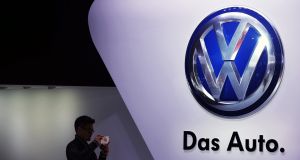 Almost 600,000 cars on US roads are powered by engines rigged to appear to emit less nitrogen oxide than they do. Photograph: EPA

Volkswagen, Europe’s largest carmaker, hopes to avoid a US court battle on Thursday by offering US drivers of its manipulated diesel cars a free fix and $5,000 (€4,426) each in compensation.

Thursday is the deadline set by a federal court in San Francisco to present a plan for dealing with almost 600,000 cars on US roads powered by engines rigged to appear to be emitting less nitrogen oxide than in reality.

According to Germany’s Die Welt daily, a company deal with the EPA environmental authority comprises “a kind of memorandum of understanding”, with other issues to be resolve in the coming months.

Striking a deal with the EPA - and the Californian authority CARB - is essential for the company for two reasons. It could help it to dodge drawn-out legal action in the US, while allowing the Wolfsburg company to work out how much money it needs to set aside to pay for the scandal clean-up.

News of the imminent deal was welcomed by investors, with VW’s long-suffering shares rising 6.61 per cent on the Frankfurt stock exchange.

It remains to be seen if the deal will be accepted by US authorities, though VW officials told Die Welt they were confident it would go through - and serve as a reference point for class-action lawsuits.

Last September, after being caught by US environmental authorities, VW admitted it had manipulated some 11 million diesel engines worldwide including Volkswagen, Audi, Porsche, Skoda and Seat brands.

The US federal trade commission alleges that the manipulation was part of a corporate strategy to sell more German cars in the US on the basis of fraudulent green claims.

Earlier this week, it was reported that the manipulation software was designed in 1999 by Audi but only implemented six years later.

“Those people later switched to VW and, when there was a problem with emissions, they remembered it and did something they were not allowed do,” said an unnamed company source to Reuters.

The US investigation prompted many German government and industry officials to claim VW had been targeted over what was a widespread industry practice.

In response, Berlin’s federal transport ministry has ordered many of the world’s major car companies, including US-owned Ford and Open, to modify their engines to cut emissions of noxious nitrogen oxide.

The VW supervisory board meets on Friday to discuss the ongoing fall-out of the dieselgate scandal. In the third quarter VW set aside €6.7 million to cover the fix costs. The company is expected to post a multi-billion loss for 2015 and may announce a dividend waiver to shareholders for the first time since the early 1980s.

It comes after a row last week over whether, given the biggest corporate scandal of recent decades, VW managers deserve their annual bonuses. Leading managers annoyed shareholders by agreeing to give up only part, but not all, of their performance-related payments.

Meanwhile Apple has reportedly failed to woo Germany’s BMW and Daimler to join its efforts to build the so-called iCar.

According to Handelsblatt, Apple is anxious for close incorporation of the car’s digital brain into its iCloud service. BMW and Daimler, citing disagreements over final control of the driver data and German data protection concerns.

Earlier this week, rumours surfaced that the Californian company is working on a next-generation car in a secret Berlin laboratory.

10 Empathy: the secret ingredient in innovation