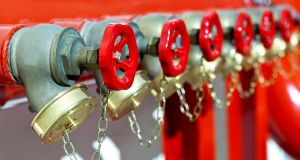 Pentair is to use the proceeds from the valve unit sale to repay debt and fund acquisitions. Photograph: iStock

Pentair, an industrial company that moved its base to Ireland from Switzerland in 2014, has agreed to sell its valve control business for $3.15 billion (€2.78 billion).

US-based Emerson Electrical, which makes products and provides engineering services for a range of industrial and consumer markets, said late on Thursday that the deal will complement its existing valve and actuation business and lead to cost savings.

The Pentair business makes valves, fittings and controls for machinery used by oil and gas, power and pharmaceutical companies and has been hit by a slowdown in spending by energy companies amid a slump in oil prices in recent years.

Pentair incorporated in Ireland in November 2013, according to filings with the Companies Registration Office in Carlow. However, its corporate headquarters are in Manchester and the company is tax resident in the UK. Its shares are listed on the New York Stock Exchange.

The company said in 2014, as it reincorporated in Ireland, that Ireland’s common-law jurisdiction was more in line with the US’s than Switzerland’s civil law regime – making it easier to execute mergers and acquisitions, pay dividends and carry out other functions.

Pentair will use the proceeds from the unit sale to repay debt and fund acquisitions in areas such as water quality, filtration and equipment and building protection, the company said. Share buybacks are another potential use for the company, which has been a target of activist investor Nelson Peltz’s Trian Fund Management.

Pentair bought the valves and controls unit in 2012, in an all-stock merger with the flow-control business of Tyco International.