CRH in limbo as Holcim and Lafarge reopen negotiations 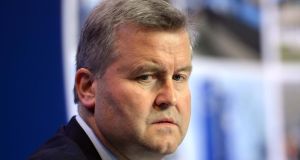 CRH chief executive Albert Manifold will be frustrated by the delay in the merger as the company have committed to buying Holcim and Lafarge’s overlap assets. Photograph: Eric Luke

It was supposed to be a concrete proposal. Now CRH’s shareholders are due to converge on the Clyde Court Hotel in Ballsbridge, Dublin, on Thursday morning to vote on a €6.5 billion acquisition that may, or may not, go ahead.

It would be the biggest deal in the history of Ireland’s largest listed company. But Holcim and Lafarge, the Swiss and French building materials giants, are prevaricating over their €40 billion merger, which was due to result in the sale of some of their overlap assets to CRH.

Under pressure from disgruntled shareholders, Holcim now wants a bigger slice of the merger and more control. Lafarge, which needs the deal more than Holcim, won’t do it at any price but will keep trying to get agreement.

Frustrating though it might be for CRH’s chief executive, Albert Manifold, the Irish company has to wait on the sidelines until Holcim and Lafarge either agree or go their separate ways.

CRH has irrevocably committed to the deal, but only if Holcim and Lafarge seal their union. If there is no merger, no deal for CRH to buy the overlap assets exists. It is all or nothing for Manifold. Well, not quite nothing.

The terms of its deal dictate that CRH will receive a break fee of more than €157 million if the transaction is not completed. Conversely, if CRH shareholders vote down the transaction but the Holcim-Lafarge merger still goes ahead, the Irish company must hand over €157 million.

The assets CRH is due to buy will generate €752 million in earnings from revenues of €5.1 billion. The deal would also catapult CRH to third in the global rankings of building materials groups. Analysts were united in agreement that it would be a “game changer” for CRH.

CRH plans to pay for part of the assets with €2 billion of cash from its balance sheet. To fund the rest of the transaction, it has raised €1.6 billion in a share placing, on top of huge new debt facilities.

Herein lies the danger for the Irish company. Its capital base could be all dressed up with potentially nowhere to go. If the transaction fails, CRH will have a mountain of cash, which comes at a cost, and not enough deals to throw it at. And the company’s hand would be weakened in negotiations over any new transactions, as its counterparts would be aware of its anxiety to do a deal.

David Holohan, of Merrion Capital, said CRH will be hoping that Lafarge “gives in” to Holcim.

“If the deal is not completed, it is back to the drawing board for CRH,” he said.

Analysts expect that Holcim and Lafarge will come to a new arrangement. If they don’t, and walk away, it would be extremely unlikely that CRH would be able to step in and buy up some of the assets anyway. For now, it is a waiting game for the Irish company.