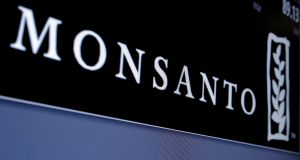 Monsanto’s shares ended 0.8 per cent lower at $106.10 in New York on Tuesday amid uncertainty over whether any agreed deal will clear antitrust hurdles. Photograph: Brendan McDermid/Reuters

Bayer is bracing itself for tough regulatory scrutiny of its $66 billion deal to acquire Monsanto, which will transform the German aspirin-to-chemicals conglomerate into the world’s biggest supplier of seeds and crop sprays to farmers.

The all-cash transaction announced on Wednesday ends four months of negotiations between the two companies, after Bayer raised an opening bid of $122 for each Monsanto share in May at least three times to clinch the takeover at $128.

Hugh Grant, Monsanto chief executive, stands to make more than $226m from the sale, according to the company’s latest annual report, with a large amount of the sum coming from the vesting of shares and options the long-serving executive holds, as well as a severance package if he leaves as a result of the sale.

But the deal comes with authorities already trying to digest the merger agreed last year by Dow Chemical and DuPont, and ChemChina’s acquisition of Switzerland’s Syngenta this year. The three deals would reduce the number of global players in agricultural chemicals from six to four.

Consolidation has been driven by a global grain glut that has pushed down crop prices and hurt farm incomes, leading to reduced investment in agricultural inputs like fertilisers and sprays.

The Bayer-Monsanto deal includes a $2bn break-fee payable by Bayer to its US rival should it walk away from the agreement, or if it gets blocked by regulators, underscoring the significant risk that the takeover faces from competition authorities in a number of countries.

Werner Baumann, Bayer chief executive, said the companies would need to file in about 30 jurisdictions for the merger, and acknowledged that it would need the approval of regulators in the US, Canada, Brazil and the EU.

Bayer’s proposed acquisition of Monsanto values the target at $66bn including debt. Monsanto’s equity value is about $57billion.

The transaction ranks as the largest all-cash deal ever attempted and biggest foreign acquisition of a US company.