Enterprise Ireland invests millions of taxpayers’ money: does it deliver?

EI has invested in 1,000 companies since its High Potential Start-Up Unit was set up in 1989 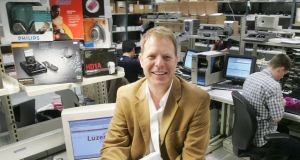 Every year, Enterprise Ireland spends millions of taxpayers’ money investing in companies it believes could be significant contributors to the economy in the future through its High Potential Start-Up (HPSU) unit. But how good is it at picking winners?

It’s a tricky statistic to ascertain – after all, how do you determine success? Is it a company that creates 10 jobs? One that offers its investors a 50 per cent return on investment? Or a Facebook or Google-type giant?

A common rule of thumb says that out of 10 start-ups, three or four will fail, while another three or four will return the original investment. This means that as few as two will produce substantial returns. On that basis, EI stacks up well.

The HPSU concept stretches back to 1989 and, since then, Enterprise Ireland has invested in about 1,100 companies.

From a financial perspective, the rewards to Enterprise Ireland – and in turn the taxpayer – may not be as impressive.

“We didn’t make a fortune, but we didn’t lose a fortune. We made our money and a bit more back,” says John O’Dea, manager for start-ups at Enterprise Ireland.

It’s not something that would satisfy many VC investors, but for Enterprise Ireland, it’s about a lot more than just making money.

“From the taxpayers’ perspective, the real benefit is having 10,500 people employed in 550 businesses and another 4,000 in companies that were acquired,” he says¨.

He adds that from an EI perspective, a failure only counts if a company doesn’t create any jobs.

“Most businesses we invest in, if they grow to 20-30 jobs in the medium period, then that’s going to be a real success,” he says.

E-commerce provider Luzern Solutions is one of the HPSU success stories from the “Class of 2003”.

According to its chief executive and co-founder Ken Doyle, the whole package it received from EI has made a “huge difference” in enabling the company to get to the point where it is today, with 50 staff and revenues of almost €20 million.

Back in 2003, attracting finance for a start-up was challenging.

“At the time, there was more emphasis on money going into property or asset- based investment,” he says. Without the support of EI, Doyle says it would have been “a lot more difficult. I’m not sure we’d have the same outcome”.

Huge strength
Alex Duncan, who co-founded text messaging provider Open Mind Networks and was also in the same group of HPSUs, says that EI’s support was “a huge strength” in helping the company grow to the stage it’s at today.

Without it, Open Mind Networks could not have got off the ground, says Duncan, never mind develop to the point where it has a staff or more than 50 and customers in over 30 countries.

For Duncan, this support package will be “vital” for other companies.

Enterprise Ireland appears to be beating the odds when it comes to picking winners – a record which is even more impressive given that it invests at a very early stage in companies and will only invest in those that might otherwise have struggled to get funds.

“If the private sector is prepared to put up the money, we won’t,” notes O’Shea.

However, one area that might disappoint is the number of companies that leave Irish hands. Indeed for Enterprise Ireland, the 15 per cent or so of HPSUs that get acquired is not ideal.

“We don’t consider sales as a success,” says O’Shea, pointing to the example of Stokes Bio, the Limerick-based biotechnology company, which was sold for about €30 million to California-based Life Technologies in 2010.

“It was acquired by a multinational, but we would have preferred if it grew as an Irish indigenous business. In the long term our vision is for indigenous-scaled businesses,” he says.

Often however, other investors may push a sale through. “A VC investor is looking for an exit within a certain period of time. It’s human nature and is the way of the world,” O’Shea adds.

And, as Doyle points out, getting to the stage where you attract interest from potential acquirers can be a hard slog.

Exit through trade sale
“There will have been a lot of blood sweat and tears along the way, so they (shareholders) may need to get something back from that investment,” he says.

This tendency to exit through a trade sale means that, of Enterprise Ireland’s 1,100 or so HPSUs over the aforementioned 20-year period, less than 3 per cent managed to get to sales of more than €50 million.

“It’s a very rare company that manages to hang on to growth of €50 million,” says O’Shea, adding that it would be “wonderful” if EI could get one company to do an IPO each year.

“But in reality, from the taxpayer’s perspective, that isn’t the objective,” says O’Shea. “A company that grows to 20-30 jobs in Carlow is actually really important.”

Of the 61 companies, only 55 were actually disclosed and, of these, 18 – or 32 per cent – have since closed, which is higher than the figure of 20 per cent reported over a longer 20-year period (see main text).

THOSE THAT WERE SOLD:

Selatra: nine years after it was set
up by a group of experienced
telecommunications professionals who came from Alcatel, Logica, and
Motorola – and eight years after the company received funding from EI ’s HPSU – the mobile games service
provider Selatra was sold to the Swedish hosting and mobile services company 24MAS.

Founded by Dylan Collins and Sean Blanchfield in 2003, Demonware started its life developing real-time network software for the gaming industry. Its software has been used in games such as Call of Duty 3, and Saint’s Row. In 2007, it was sold for about $15 million to US games group Activision.
Established in June 2001, Aliope’s plan was to develop and market video-management techniques to enable companies to distribute digital video archive material through any electronic device – such as desktop computers, hand-held devices, mobile phones and set-top boxes. It sprang out of the DCU Centre for Digital Video Processing and in 2004 was sold to Dublin mobile software firm Anam.

THOSE STANDING ON THEIR OWN:

Based in Dublin, and with offices in London and Beijing, Púca provides a comprehensive range of mobile
technologies and services
encompassing mobile marketing campaigns, business communications and mobile commerce. It’s led by
Eamon Hession and the company made
a profit of €179,125 in 2011, compared
with a loss of about €3,000 the previous year.

In 2002, Ken Doyle and Patrick Sherlock brought their experience working for multinationals in the high-tech sector to Luzern Solutions . The e-commerce solutions provider now employs 50 people with revenues approaching €20 million.

THOSE THAT HAVE CLOSED:

Also in the “class of 2003” 3 Procure Technologies was established to
develop an electronic catalogue system with the aim of becoming “an e-commerce leader” and empowering companies in the procurement arena. However, it closed in 2010.

Tipperary firm Microtron Controls
was engaged in the “research,
development and manufacture of
microprocessor-based electronic security and telecommunications equipment”. However, it closed in
2007.