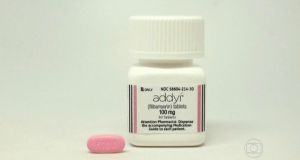 Investors in Sprout, the female libido pill maker bought by Valeant Pharmaceuticals for $1 billion last year, have said the company has failed to successfully commercialise the treatment by setting the price too high and neglecting to market it, putting the drugmaker at risk of violating the merger agreement.

The group, representing all Sprout shareholders at the time of the acquisition, sent Valeant a letter on March 14th requesting materials showing that the company can fulfill its obligations under the deal going forward.

Among the documents, the investors are seeking evidence that Valeant plans to spend $200 million for marketing and research and development for 2016 and half of 2017, as part of the agreement.

They also ask for assurance that Valeant will keep a sales force of 150 to distribute the drug, called Addyi, which has posted disappointing sales since its introduction five months ago.

“Valeant predatorily priced Addyi at $800 a month even though Sprout had established a price point of approximately $400 a month for the drug based on market research,” the investor group said in the letter.

“As a result of this predatory pricing, insurance companies refused to cover the drug, which has led to the drug not being affordable for millions of women.”

Valeant has received the letter and will respond in due course, spokeswoman Laurie Little said in an e-mail.

“While confidentiality obligations under the merger agreement prohibit us from commenting on specific contractual terms, Valeant intends to comply with all of its obligations under our agreement with the former shareholders of Sprout, including as they relate to marketing spend, number of sales reps, and post- marketing studies.”

The demands from Sprout’s investors are another problem for the embattled drugmaker.

Valeant, whose stock has declined more than 85 per cent since its peak in August, is struggling to cut costs, fix underperforming businesses and pay down a debt that ballooned to more than $30 billion.

The Laval, Quebec-based company, which has delayed filing its annual report pending an internal investigation, also needs to reset a strategy after its business practices came under scrutiny, and is looking for a new chief executive to replace Mike Pearson.

The investor group received cash in the acquisition, but they stand to collect royalty payments if the drug is successful. They are requesting that Valeant provide all “books, contracts, documents and records” related to the development and commercialisation of Addyi by April 13th, according to the letter.

“The Sprout shareholders, presented by Boies Schiller and Flexner managing partner Jonathan Schiller, have a contractual right to obtain the information that we have requested of Valeant,”Mr Schiller said by e-mail. “They also have legal remedies under the merger agreement to pursue claims against Valeant for its failure to perform its obligations.”

Sprout is one of four business lines that have performed poorly and need fixing, Mr Pearson told senior managers this month. The struggling unit has started to cut jobs and eliminated the positions of its two national sales directors, according to people familiar with the matter, who asked not to be identified because the moves aren’t public. In addition, about 12 regional sales directors have been asked to interview for their jobs, the people said.

At the time of the merger agreement in August- within days of its approval by the US Food and Drug Administration -both parties expected Addyi to hit $1 billion in net sales in the first full seven quarters following its introduction, the investors said in their letter.

By December, Pearson told investors in a meeting that 2016 sales expectations were in the range of $100 million to $150 million. On March 15th, after the letter was sent, Mr Pearson told analysts on a conference call that Valeant had cut that forecast “significantly,” without giving more details.

“Valeant remains strongly committed to Addyi and to ensuring that it remains affordable and accessible to premenopausal women who have been waiting for a medical treatment option,”

Addyi has been been struggling in part because the mail- order pharmacy that could have helped distribute the drug, Philidor Rx Services, is now out of the picture following a scandal that forced Valeant to sever the relationship in October.

Insurers are denying or limiting coverage for the daily pill, and large pharmaceuticals benefit managers have been blocking it.

About 57 per cent of prescriptions written are now being filled and paid for, up from 25 per cent to 30 per cent in the fourth quarter, she said.

The treatment, which was rejected twice before getting approved, carries a boxed warning, the FDA’s strictest, and women have to sign an agreement acknowledging the risks.

In their letter, the Sprout investors said Valeant failed to comply with its obligation to educate patients and physicians about the product. Valeant was obligated to spend at least $200 million over six quarters starting in January to advertise it in print or television, develop disease-awareness campaigns and make educational materials, among other things, they said.

“Letters like that are designed to get a response and suggest that there may be litigation,” said Charles Elson, director of the John L. Weinberg Center for Corporate Governance at the University of Delaware. “It will go on for a while. These things stretch on for a few years.”