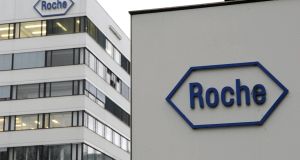 Swiss pharma giant Roche is closing its only Irish manufacturing plant with the loss of 240 jobs.

The closure of the company’s Clarecastle facility in Co Clare means oncology drug specialist Roche will retain only a sales operation in the Irish market, employing around 90 people.

The move is part of a broader restructuring programme that will see the group shed 1,200 jobs as it shutters four manufacturing sites. The others are in Spain, Italy and the United States.

The company said in a statement that it would look to sell the sites in an effort to limit job losses.

Irish executives informed staff on Thursday of the plan to end operations on a site which has been manufacturing pharmaceuticals since 1974. The company said it expected to wind down operations gradually between now and the end of 2018, or the start of 2019, unless the plant is sold in the meantime.

Gerry Cahill, managing director of Roche Ireland said the decision was in no way a reflection on the people or the site.

“Today is a very difficult day for everyone on site,” he said. “We will do our utmost to support our colleagues during this transition.”

The company will now enter formal consultation with employees at Clarecastle and their union representatives.

The decision to close the Irish plant and the other three units follows a review by the company of its global manufacturing network for small molecules.

The new generation of specialised medicines, based on biologics, are made in smaller volumes than traditional pharmaceuticals and require different manufacturing technologies.

As a result, the company said, as its portfolio of products changed to reflect the move to biologics in the sector, its network of manufacturing plants was underutilised.

Siptu, which represents around 00 workers at the Roche plant, said it was eeeking as immediate meeting with the management of the parent group.

Sector organiser, Alan O’Leary, said the announcement came as a “complete shock to our members”.

“The company is a very important employer in the area and this announcement is of massive concern to all in the local community,” he said.

“Union representatives are seeking an urgent meeting with the company to discuss how these jobs can be saved.”

The Irish business, which makes active ingredient that is sold to other Roche operations, made a profit of €9.45 million last year. That was down from €11.4 million in 2013. Turnover at the business fell sharply to €79.2 million from €103.2 million the previous year.

The company plans to invest SFr300 million francs to build up biologics operations in its Kaiseraugst facility in Switzerland, It said it had invested more than SFr2 billion francs in its biologics manufacturing capacity over the past two years.

“We are responding to the evolution of our small molecule portfolio towards specialised medicines produced in lower volumes,” Daniel O’Day, chief operating officer of the pharmaceuticals division of Roche, said.

1 In this strangest of recessions, what happens next for Ireland?
2 Michael O’Leary is the boss you want to lead an airline out of crisis
3 Bank of Ireland sees about 2,000 staff apply for voluntary redundancy
4 Should I switch bank now with Ulster Bank at risk of closing?
5 Ireland’s Covid-19 economy in five graphs
6 Minister seeks AG’s advice on banker accountability laws
7 Best Covid-19 ‘influencers’ will avoid hectoring
8 Fortnite owner signs multimillion deal to buy Irish ‘kidtech’ firm
9 Ireland is in danger of losing the woods for the trees on emissions reduction
10 ‘Working remotely requires more individual contact, not less’
Real news has value SUBSCRIBE