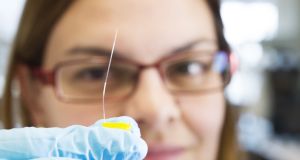 Cúram centre in NUIG: Research approach is designed to facilitate a move from basic research to clinical application as efficiently and quickly as possible. Photograph: Andrew Downes/xposure

A new centre for medical device research representing a unique partnership between Irish universities and industry is opening in NUI Galway.

The Cúram centre represents a €68 million investment in medtech research. Science Foundation Ireland (SFI) and industry players have invested €49 million over six years to the project. In addition, it has secured a further €19 million in funding from the EU’s Horizon 2020 programme, more than €4.3 million of which has been awarded directly to indigenous Irish industry.

“Chronic diseases are the particular focus of Cúram’s research. We want to launch devices which are more effective for the individual patient, but more affordable to lessen the burden on healthcare systems worldwide,” said Scientific director Prof Abhay Pandit, who will lead a 280-strong research team in the new centre.

The research approach at the centre is designed to facilitate a move from basic research to clinical application as efficiently and quickly as possible.

“The medtech sector is hugely important to the Irish economy with over 400 companies based here,” she said, noting that they employ more than 29,000 jobs and delivered €12.6 billion worth of exports.

SFI director general Prof Mark Ferguson said Cúram had been at least 15 years in the making.

NUI Galway president Dr Jim Browne said the centre was already attracting new research talent into Ireland and that a key part of its role was to train the next generation of scientists, employees and entrepreneurs in this sector.

Helen Ryan, former chief executive of Creganna Medical, who is chairing the board of Cúram, said the centre would bring huge advantage to the Irish medtech sector.

“Cúram’s entrance into the Irish medtech space will give companies here a competitive edge and adds a huge amount of value to an Irish location for multinational medtech companies looking to invest in Ireland in the future,” she said.

1 Why are markets booming when a crash is on the way?
2 Your old car could be telling others all your personal data
3 Permission sought for €150m film and media campus in Wicklow
4 Drink tax row; no respite for Bewley’s; and mortgage U-turn at AIB
5 Covid-19: Publicans and restaurateurs row over calls for VAT cuts
6 AIB U-turn on mortgage block for those on Covid wage subsidy
7 Government committed to finalising roadmap for safe overseas travel ‘shortly’
8 Staff at Bewley’s cafe on Grafton Street are made redundant
9 Pfizer and BioNTech’s Covid-19 vaccine trial yields positive results
10 Dunnes Stores trials online ordering from Cornelscourt outlet
Real news has value SUBSCRIBE