APC and Swissport to create 300 jobs in Dublin 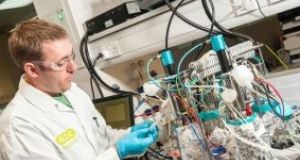 Pharmaceutical research firm APC is to create 100 new jobs in Dublin the company said on Monday as it officially opened a new research centre in Co Dublin.

APC was founded by Prof Brian Glennon and Dr Mark Barrett and is a spin-out from the department of chemical and bioprocess engineering at UCD. Established in 2011, the firm provides pharmaceutical processing technologies and customised solutions to companies.

The group currently employs over 60 people at its offices in Cherrywood Business Park. Its clients include 8 of the top 10 pharmaceutical companies and five of the top 10 biotech firms in the world.

APC is supported by Enterprise Ireland, which provided R&D funding for the company’s team development, technology and international market access.

“Our success has come from working with talented and creative engineers and scientists. We are looking to expand the team with today’s announcement of 100 highly-skilled research and development jobs across chemical engineering, sciences and analytics,” said Mr Barrett, the company’s chief executive.

“We need people who enjoy the rewards of working in an environment that is driven by cutting-edge technology and science. In return, we will provide them with an opportunity to do something extraordinary: to help change patient outcomes for the better,” he added.

The group, which has operated at the airport sinces its takeover of Servisair in 2013, said the new positions would be in a number of areas including customer service, ramp handling, flight operatiions and security.

The company said business at Dublin airport grew 23 per cent last year and is expected to rise by a further 10 per cent in 2016.

“We are delighted to see Swissport’s business go from strength to strength at Dublin airport. The recruitment of a further 200 jobs, on top of the 350 recently announced by Dublin Airport further endorses the economic impact of the airport,” said Vincent Harrison, managing director, Dublin airport.

1 Fianna Fáil may have just pressed the pause button on the property market
2 Who are Ireland’s 17 billionaires?
3 My father in a nursing home wants to gift me his house
4 Are there annual limits on inheritances or gifts to a child?
5 European investor acquires Harcourt Road offices for €55m
6 Netflix forecasts tough start to 2020 as Disney+ goes global
7 O’Flynn company ‘mistakenly’ got go-ahead for Birmingham project
8 Tipperary land holding of 800 acres seeking €11m
9 State subsidises public sector retirees to cover gap until State pension
10 Eason puts Blanchardstown Centre store on market at €16m
Real news has value SUBSCRIBE