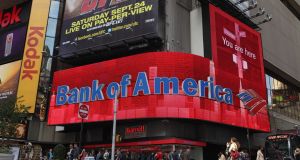 Bank of America is one of a smaller number of firms to extend the bonuses to employees working outside the US, including those in its Irish operation, based in Leopardstown in Dublin

About 700 Bank of America workers in Ireland are in line for an estimated €800 windfall from US president Donald Trump’s $1.5 trillion tax cuts.

Many US companies announced once-off bonuses for employees late last year after politicians backed legislation slashing tax on corporate profits to 21 per cent from 35 per cent, saving businesses $1.5 trillion a year.

Bank of America Merrill Lynch, which employs about 700 people in the Republic, has told workers in its Irish operation that it intends paying a similar bonus here.

It is understood that the bank intends paying a similar sum to staff in Ireland, which would translate as around €800 each before income tax, which could be levied on the bonus, depending on how the company pays it.

Bank of America is one of a smaller number to extend the bonuses to employees working outside the US, including those in its Irish operation, based in Leopardstown in Dublin.

The tax cuts are aimed at luring capital back to the US from countries such as the Republic, whose low charge on corporate profits Mr Trump singled out in a number of speeches.

However, US legislators took time to vote for the cuts, as many representatives argued that they favoured wealthy companies and voiced fears that they would stoke inflation.

The move could see it increasing staff numbers to more than their current 700. Mr Moynihan indicated that the bank would increase its presence across Europe in coming years.

Mr Moynihan told The Irish Times that the move would also mean merging the Irish arm with its most important banking unit, which is now based in London.

1 Michael Smurfit: ‘I asked Trump to invite me to the White House for my 80th birthday’
2 Joint accounts: if one of us dies, can the other access the money?
3 Small businesses are cannon fodder in zealous anti-virus experiment
4 ‘I’m so lucky to be in the Caribbean – a million miles from Derry Girls’
5 ‘The recovery needs to be a full-scale economic renewal’
6 Ryanair expects air fares to fall when flights take off again
7 Tobacco makers still trying to make a mint from Irish menthol market
8 Minister calls on EU to act against tobacco firms ‘undermining’ menthol ban in Ireland
9 Ireland stands to benefit in a big way from investing in public transport
10 Brexit, coronavirus and bark beetle pose challenges for Coillte
Real news has value SUBSCRIBE