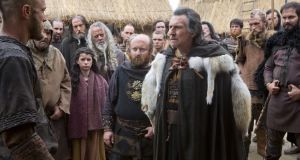 Morgan O’Sullivan and James Flynn have produced successful international and domestic TV series including The Tudors, The Borgias, Vikings (above) , Love/Hate and Raw, and films such as Calvary.

A German film company has claimed before the Commercial Court that two well known Irish film producers have diverted funds out of a film production company to either themselves personally or corporate entitles controlled by them.

Berlin based W2 Filmproduktion Vertriebs GmbH has sued producers Morgan O’Sullivan and James Flynn, claiming it has lost estimated revenues of €25 million in relation to activities of Irish registered Octagon Films Ltd in which W2 owns 49 per cent of the shares.

It is seeking damages for alleged breach of contract, breach of duty and breach of fiduciary duty.

It claims Mr Flynn, Monterey, Ballyedmonduff Road, Stepaside, Dublin, and Mr O’Sullivan, Ardmore Park, Bray, Co Wicklow are directors of Octagon. Both have produced successful international and domestic TV series including The Tudors, The Borgias, Vikings, Love Hate and Raw, and films such as Calvary.

W2, which invests in international film productions, says it acquired shares under a shareholders agreement in Octagon in 2002 so as to join a successful start up company.

It claims the defendants have breached that agreement causing loss of revenue to Octagon of some €50 million, with a consequential loss to W2 of €25 million.

Among various claims, it alleges the defendants, while using the Octogon name, have diverted funds, profit and income to themselves personally or corporate entities controlled by them.

The two had caused work to be sold on at cost or near cost to other entities controlled by them and misled W2 via false and misleading information, it is claimed.

Since 2003 the defendants did not give a true and fair view of Octagon’s financial position at the end of every year, it is further alleged.

The defendants have said in correspondence W2 only had an interest in films it specifically funded and Octagon was only in the business of developing films, not producing them. They also claim they were perfectly entitled to carry out their own work under the Octagon name.

In a sworn statement, W2 director Winfried Hammacher said, following production of two films, W2 understood Octagon was not trading in any significant way between 2010 and 2014. In late 2014, he became aware of the series Vikings and, when he investigated its makers and producers, noticed a credit for Octagon.

Further investigations showed Octagon presented itself to be involved with more than 70 TV series and films, he said.

W2 sought more details from the company but only got partial information and justifications. They discovered a pattern with many films where Octagon is the name associated with the production, does development and pre-production and incurs the out-of-pocket development costs.

Mr Hammacher said Octagon received only nominal monies in respect of Vikings when it should have received “a substantial income fee running to millions of euro”. Business was diverted to other entities with similar names linked to the defendants, he also said.

Mr Hammacher said Octagon was borderline insolvent for much of its trading life when in fact it was enjoying a central role in the production and financing of some of the most successful film and TV dramas in the Irish market at the time.

The dispute came before Mr Justice Brian McGovern at the Commercial Court on Monday when W2’s lawyers rejected arguments by the defendants the case should not be fast-tracked because of alleged delay in bringing it. The matter was adjourned for a week to allow the defendants outline their objections to entry in a sworn statement.