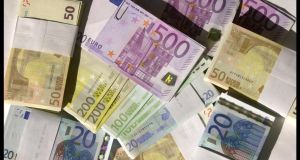 KPMG, the special liquidator of Irish Nationwide Building Society, has appointed Eugene F Collins solicitors to carry out an “independent review” of legal advice that it should sue the society’s former directors but not its former auditor – KPMG.


KPMG, the special liquidator of Irish Nationwide Building Society, has appointed Eugene F Collins solicitors to carry out an “independent review” of legal advice that it should sue the society’s former directors but not its former auditor – KPMG.

The advice being reviewed was given to the State-appointed board of Irish Nationwide post-2009 by McCann FitzGerald solicitors, which, like KPMG, had previously worked with the society for many years under its managing director Michael Fingleton.

In a statement yesterday, IBRC special liquidator KPMG said it had appointed Collins to “carry out an independent review of the legal advice provided to IBRC, Irish Nationwide Building Society and the special liquidators of IBRC by McCann FitzGerald Solicitors concerning certain legal proceedings against former directors of INBS”.

“Eugene F Collins will review whether the legal advice received to date in relation to these proceedings has been adequate and appropriate as to the joinder or otherwise of KPMG as a party to the proceedings,” it added.


Managing proceedings
Litigation partner Terry Leggett will lead the engagement. “It is the intention of the special liquidators to advise external parties on the findings and advice of Eugene F Collins once it becomes available, and to take account of this advice in further decisions on the management of these proceedings,” the special liquidator’s statement added.

KPMG said it was taking two distinct actions – first against Michael Fingleton, its former managing director and second against its board: Michael Walsh, Stan Purcell, David Brophy and Terry Cooney.

The special liquidator initially named former Irish Nationwide director Con Power as among the individuals against whom it was taking action, but later issued a new statement which said: “The JSL [joint special liquidators] wish to clarify that no proceedings against Mr Power are under way on behalf of IBRC (in special liquidation).”