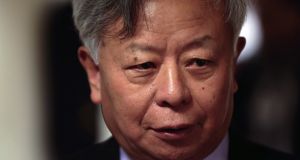 A wave of about 25 African, European and South American countries, including Ireland, is set to join the China-led Asian Infrastructure Investment Bank this year, reinforcing Beijing’s determination to push a global agenda even as President Donald Trump rails against the ills of economic globalisation.

Jin Liqun, president of the AIIB, said on Monday that an expanded membership would help boost lending by the $100 billion multilateral organisation, which was founded last year with 57 founding shareholders in spite of opposition from the US.

“Now that China has developed, it is our turn to contribute,” Mr Jin said in an interview. “China needs to do something that can help it be recognised as a responsible leader.”

Ireland, Canada, Ethiopia and Sudan are understood to be among the 25 countries expected to join this year, with several likely to be inducted at the bank’s annual meeting in June.

The AIIB is keeping its door open to the US, which criticised the UK’s “constant accommodation” of China when London announced in 2015 that it would join. However, the People’s Daily, an official Chinese newspaper, quoted Mr Jin as saying last November that the US position may be softening, with officials in Mr Trump’s team disagreeing with Washington’s refusal to join.

“The door is open to others, and though we are not soliciting their membership, they can come to us,” said Danny Alexander, vice-president of the AIIB. The bank is also open to the possible membership of Japan, which alone among Asian economic powers has remained aloof.

“We have applications from a number of Europeans who didn’t join in the first wave, some Asian countries, South Americans and Canada has applied to join,” said Mr Alexander. “So this year the membership will expand quite substantially.”

The broadening of the AIIB’s membership chimes with a staunch defence of globalisation made by Xi Jinping, China’s president, at the World Economic Forum in Davos this month. Mr Xi warned of the dangers of protectionism and urged countries not to pursue narrow interests at the expense of others.

One key area for the membership push is Africa, where only Egypt and South Africa have joined. Carlos Lopes, who recently stepped down as head of the UN Economic Commission for Africa, said: “The fact that three countries – especially Ethiopia – are interested in joining is very significant.”

African countries wanted to show that they were not just recipients of Chinese money but that they were happy to support Beijing’s policy agenda, he said.

“There’s a lot of trepidation in the development world with Trump’s election and Brexit and the lack of clarity in terms of trade,” said Mr Lopes, now a visiting professor at Cape Town University. “I anticipate a stronger move towards China from African countries.”

Arkebe Oqubay, a senior minister in charge of Ethiopia’s industrial policy, confirmed Addis Ababa intended to join the bank. It had wanted to be a founder member along with South Africa but had missed the deadline, he said.

Ethiopia had not yet agreed what quota it would pay to join the AIIB, Mr Oqubay said, but it was confident its contribution would be more than compensated for with fresh finance for projects in energy and transportation, the bank’s main areas of focus.

“Being a member of the club would help us access new financial resources,” he said, adding that Ethiopia spent 60 per cent of its federal budget on infrastructure. “We are looking for alternative financing and this could be a good opportunity for us.”

Ethiopia had spent more than $6 billion, much of it self-financed, on the Grand Ethiopia Renaissance Dam which will have a capacity of 6,000mw, making it Africa’s largest hydroelectric dam, Mr Oqubay said. A railway, recently opened, between Addis Ababa and Djibouti port had cost $4 billion. The first standard gauge international railway in sub-Saharan Africa, it was 70 per cent financed by China’s Eximbank.

As membership in the AIIB expands, China’s voting share in key decisions is set to be pared back, potentially depriving Beijing of the de facto veto it currently wields.

China’s current voting share is 26 per cent, just above the de facto veto level in an organisation that requires a three-quarters majority for certain decisions. Beijing is understood to be willing to relinquish its veto as the price of expanding the bank’s footprint.