Head of German operations to take over in September 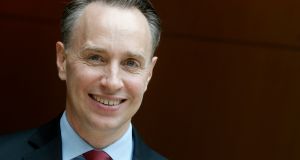 The incoming chief executive of French insurer Axa has said that he wants the company to focus on the group’s digital transformation rather than making more big acquisitions.

Axa announced on Monday that Thomas Buberl, the 42-year-old head of the group’s German operations, would take over as CEO of the insurer in September, replacing Henri de Castries, who has held the job for 16 years.

Following the news, Mr Buberl said that finding growth for Axa was going to be a key challenge, but this should come through improving its digital offering rather than big deals.

“There is a question over whether we should increase the size of the franchise, or should we put focus on transforming the business model for a digital future,” he said. “I think that digital should be our focus.”

The insurance industry is rapidly changing, moving to a world where, instead of having few data points on which to price risk, there are now a near unlimited amount measured in real time.

Black boxes fitted in cars to measure driving safety are just one example. The potential for insurers to use health data collected through wearable devices is another possible transformational development.

Mr Buberl said that embracing the digital future will be crucial to stop them being disrupted by potential new entrants into the market. “Today our competition is Allianz and Generali, but tomorrow it could be Google and Facebook, ” he said.

The incoming chief said that digital can also help the group improve its relationships with customers, going direct to them online. “Insurance suffers traditionally from a lack of contact with customers. We want to do more,” he said.

That does not mean that Axa will not be able to use its relatively strong balance sheet to make some acquisitions, but bigger deals are not the priority. “The future will be more focused on transactions that are smaller,” he said.

Denis Duverne, the head of Axa France who will become the chairman of Axa, said that in a subdued European economy and low interest-rate environment finding “growth is the biggest challenge the industry faces”.

German-born Mr Buberl joined Axa in 2012 having previously worked at Boston Consulting, Swiss insurer Winterthur and then Zurich Financial Services where he was chief executive officer for Switzerland.

He joined Axa as chief executive officer for Germany, and was then made head of Axa’s health business as well as its life and savings business.

When asked what he was most proud of in his career, Mr Buberl said: “I am still quite young but I have found many supporters, which have pushed me and challenged me.”

Mr de Castries, 61, said that Mr Buberl was “clearly the best equipped person” for the job, adding that he was an “exceptional leader” with the “right values’.

Mr de Castries said he was proud of much of what he had achieved as head of Axa, in which time the company never lost money and doubled its assets under management.

This growth was achieved through a range of transformational deals, for example buying HSBC’s property and casualty operations in Hong Kong, Singapore and Mexico in 2012.

He said that a rapid expansion into Asia had been a success, but some investments in central and eastern Europe had been a mistake over his time as he “underestimated the governance challenges” there.

Mr de Castries has long been more than just a businessman in France. Charismatic and opinionated, he has never been afraid to speak out against the government and play a role in public life. He appears regularly on French television.

President of French think-tank Institut Montaigne and on the board of Swiss food and beverages group Nestlé, Mr de Castries is a contender to become chairman of UK bank HSBC, where he has recently been appointed to the board.

His decision to step down has nothing to do with any potential role at HSBC, he said, adding that the company had been preparing succession at Axa for three years and it was a “coincidence” that it came as HSBC deliberated over choosing a new chairman.

“We started the process years ago, way before there was any talk about succession at HSBC,” he said, adding that he would never look to “pre-empt something that is the choice of the board and selection committee”.

Mr Buberl said he was going to spend the coming months touring Axa to “get to know it better” ahead of a strategic plan that is set to be presented in mid-June.

1 EU divisions laid bare by ‘frugal four’ Covid recovery proposal
2 Pricewatch: Coronavirus has given us four categories of shopper
3 Player Wills site: Hines and APG to seek permission for 416 homes
4 Eir sells mobile mast infrastructure company for €300m
5 Schrems calls on EU authorities to intervene in ‘Kafkaesque’ DPC case
6 Economies can be restarted if bold and imaginative choices are made
7 Will remote working mean an end for the corporate HQ?
8 Dawn Meats reopens plant supplying McDonalds burgers
9 Pilita Clark: A lot of us are losing it in lockdown – but we really shouldn’t
10 Bayer reaches agreement in 125,000 US cancer lawsuits
Real news has value SUBSCRIBE