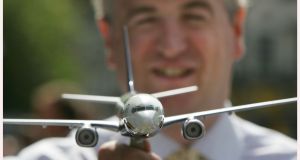 The former deputy chief executive of Ryanair, Howard Millar, is set to join aviation financing group Stellwagen with plans to raise $1 billion in capital to provide secured aircraft financing to airlines across the globe.

Mr Millar will take up the position of chief operating officer of the Stellwagen Group, which includes the Dublin based Aviation Finance Company as well as Seraph Aviation Management . Mr Millar will also serve as chief executive of Stellwagen Capital, the credit investing arm of the group, focused on credit-oriented investment strategies in industries.

Mr Millar spent almost 23 years with Ryanair as deputy chief executive and chief financial officer before stepping down in October 2014.

Douglas Brennan, chief executive, said that Mr Millar will work closely with him “to drive the operating and financial performance of the group”.

“As CEO of our new subsidiary Stellwagen Capital, Howard will lead this innovative financing vehicle in raising capital from both the debt markets and from large institutional investors mainly, in Europe and the US. This capital will enable the group to provide secured aircraft financing to airlines across the globe. This is a big step forward in the evolution of the group and we expect Stellwagen Capital to launch its initial capital raise of $1 billion in Q4 2016.”

Mr Millar said he was “delighted” to join the Stellwagen Group, pointing to a “great opportunity” to raise significant amounts of capital to finance the world’s growing fleet of aircraft.

“ The initial capital raise of $1 billion is slated for Q4 2016, and we expect to raise up to $5 billion over the next three years. We will use innovative and highly efficient structures to raise capital for secured financing of both new and delivered aircraft, and generate significant returns for our investors.”