Sean Quinn Snr ‘recklessly gambled’ hundreds of millions of euro on shares in Anglo via an investment company owned by his children, court told 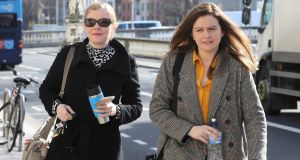 Two former senior executives with the Quinn group are “very reluctant” witnesses in the action by Sean Quinn’s adult children disputing any liability under guarantees for loans of more than €415 million, the High Court has been told.

Dara O’Reilly and Liam McCaffrey had left the Quinn group after companies were sold, are now employed by the new owners of Quinn Industrial Holdings and both have been subject to “threats and acts of violence”, their counsel Ross Gorman said.

Mr O’Reilly’s car was burned out in an incident where the flames approached his house, he said.

Both men had been joined by Irish Bank Resolution Corporation to the proceedings by the five Quinn children against IBRC and receivers appointed over shares and are “very reluctant” participants and witnesses.

They, along with Sean Quinn snr, were joined by IBRC as third parties for the purpose of claiming an indemnity against them should the children win their case against the bank.

IBRC has claimed both executives had acted as agents for the children in relation to disputed guarantees and share pledges but both men disputed that, he outlined.

The Quinn group was “essentially a family business”, Mr Gorman said. Both his clients accepted they had been senior executives in the Quinn group and were the agents of Sean Quinn Snr but denied they were agents of the children.

Mr O’Reilly had said in his witness statement that he had received instructions directly or indirectly from Sean Quinn Snr and understood Sean Quinn Snr was authorised to act on behalf of his children.

There is no allegation by the bank that either of his clients did anything wrong or breached any duty of care or made misrepresentations, counsel added.

He was making a brief opening statement for both executives in the continuing action by Aoife, Brenda, Ciara, Colette and Sean Quinn Jnr.

In proceedings against IBRC and receivers appointed over shares, being heard by Mr Justice Garrrett Simons, the adult children contend various personal guarantees and share pledges signed by them are invalid and have no legal effect.

They claim the guarantees were required by Anglo Irish Bank, IBRC’s predecessor in title, for loans advanced by it to Quinn companies in 2007 and 2008 for the purpose of unwinding Contracts for Difference (CFD) positions held by their father in the bank.

When the CFDs were unwound into Anglo shares, one portion was purchased by the “Maple Ten” group of investors and the rest by the Quinn Group.

The Quinn shares were transferred to six Quinn-owned Cypriot companies, which ultimately received €498 million from Anglo.

The children’s core claim is the securities provided by them are invalid on grounds including “unconscionable bargain”, negligence and breach of duty by the bank to them, especially to advise them.

They dispute the bank’s counterclaim seeking to hold them liable for some €83 million each under the guarantees.

Earlier on Wednesday, in completing IBRC’s opening statement, Paul Gallagher SC said the Quinn group was “chronically mismanaged” and operated “without any regard for the rules of corporate governance”.

Sean Quinn Snr “recklessly gambled” hundreds of millions of euro on shares in Anglo via an investment company, Bazzely, registered in Madeira, and owned by his children, he said.

The children are now alleging they were under undue influence of their father when they signed various guarantees and share pledges arising from loans advanced by Anglo to Quinn companies but there is no evidence to prove that, he said.

The children had not joined their father as a defendant and are working for him in a new venture, Quinn Bet, he added.

IBRC maintains the children cannot advance the undue influence claim, counsel said. As owners of key companies in the Quinn group, the children cannot ask the courts now to relieve them of the consequences “of their neglect and folly” in relation to the operation of the group, he argued.

The family had engaged in the “most deliberate and fraudulent corruption” of legal processes in other countries in seeking to move almost €500 million of assets beyond the reach of Anglo, he said.

The children are seeking to “rewrite history” and it was “monstrous” to argue Anglo had a duty to advise them as “hundreds and hundreds of millions” was borrowed from it in 2007 and 2008 in an effort to save their companies.

They had a duty to advise themselves and had done so, he said. They had agents within the Quinn group, including their father, and access to professional advisers.

While entitled to take money from Quinn companies, they were not entitled to do so to such an extent as to leave the companies in “straitened” circumstances.

The children took money out, loaned it and also bestowed “enormous gifts” on their parents, he said. They owned the house their parents had built for millions of euro, he said. Paul Gardiner SC, for Kieran Wallace, appointed by IBRC in 2011 as receiver over certain share charges, supported the bank’s arguments. Opening statements have now concluded and the case will resume on Friday with evidence from Brenda Quinn.

1 Former junior minister Michael D’Arcy did not contact ethics watchdog over new job
2 Three Ireland switches on 5G network around the country
3 Mortgage breaks will not be extended beyond this week
4 Pilita Clark: The looming legal minefield of working from home
5 State should use Covid-19 impact on building costs to build homes
6 Dublin-based ID-Pal raises €1m in funding as it looks to expand
7 Chris Johns: Boohoo exposed on pay and conditions in digital economy
8 Am I paying too much for my buy to let mortgage?
9 New car prices could rise by up to €10,000 if taxes increase in budget
10 More financial firms setting up or expanding in Ireland despite Covid-19
Real news has value SUBSCRIBE