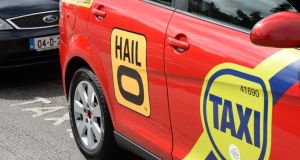 The Central Bank said moving to its new headquarters at North Wall Quay in the fourth quarter of this year should “yield a substantial reduction in this category of transport costs”. Photograph: Alan Betson

It might have been the result of city centre roadworks caused by the new Luas tracks or perhaps someone left the meter running but the Central Bank of Ireland’s taxi bill for last year shot ahead by 19 per cent or €27,541.

This has emerged from the publication by the financial regulator of its taxi expenses for 2015. It shows that €172,422.63 was spent on 11,344 journeys taken on its company account. This equates to about 45 journeys per working day.

In 2014, an additional €120,828 was reimbursed by the bank for taxis hailed overseas. An equivalent figure for 2015 has yet to be published.

The October to December period was the most expensive quarter in 2015 with the bank running up a taxi bill of €50,225.89. The fact that this period coincides with the Christmas party season must surely be a coincidence.

Some 5,900 of the trips last year involved staff travelling between its Dublin locations at Dame Street, Iveagh Court, Sandyford and Spencer Dock. The balance related to “other” journeys. The average fare last year was €15.20, which should comfortably deliver you to the city’s suburbs.

The Central Bank said it encourages staff to take public transport or use Dublin Bikes or other modes of transit where possible. “However, on occasion, taxis may have to be used for time and costs reasons,” it explained.

It added that the move to its new headquarters at North Wall Quay on Dublin’s docklands in the fourth quarter of this year should “yield a substantial reduction in this category of transport costs”.

At least one taxi company will need a plan B in place for when that day arrives.