Burning bondholders ‘could have saved the State €9bn’

Everybody regrets the banking crisis. But just how many times was the word 'regret', or variations of, used during the long-winded banking inquiry? We tried to stitch together each one in this video. Can you guess how many times it's said? #regrets 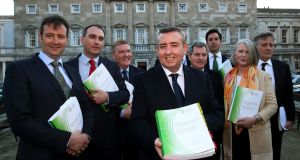 Chairman Ciaran Lynch (c) and members of the Oireachtas banking inquiry at the publication of the inquiry’s report at Leinster House, Dublin. Photograph: Brian Lawless/PA Wire

The State could have saved more than €9 billion by imposing losses on senior debt holders at the six Irish banks, the National Treasury Management Agency (NTMA) told the Government in March 2011.

Written evidence supplied to the Oireachtas banking inquiry shows the NTMA, which manages Ireland’s national debt, advised the Government that “immediate steps” could be taken to enable this burden sharing, adding that markets had already priced this haircut into the bonds.

But it also warned that there could be potential implications with “external authorities”, a reference to the European Central Bank, which had warned Dublin a “bomb” would go off if it was to do so.

The failure to impose losses on senior bondholders to recoup some of the cost of the €64 billion bank bailout has been a source of political controversy since Fine Gael and Labour entered Government.

The NTMA estimate of potential savings is higher than previous suggestions about what could have been clawed back.

However, he pulled it at the last minute after the ECB warned that it would cut the billions in emergency liquidity assistance that had been advanced to Irish banks.

This was the second time that the ECB had blocked attempts by Ireland to burn senior bondholders.

The then Fianna Fáil-led government had explored burden sharing in its negotiations on a bailout with the troika in October and November 2010, but while there was initial support from the IMF, the ECB blocked this plan.

At the launch of the inquiry’s report yesterday, Fianna Fáil’s finance spokesman, Michael McGrath, acknowledged that the ECB’s intervention had cost Irish taxpayers “billions of euros”.

Fine Gael Senator Michael D’Arcy said the Government could have proceeded but that this would have come with its own consequences.

Mr Murphy said this showed a democratic deficit within the institution and Mr MacSharry said it showed a lack of respect.

The report also confirms there were no minutes kept by the Department of the Taoiseach of the meeting on September 29th, 2008, when the bank guarantee was discussed.

It outlines how a draft press release was prepared by the Central Bank at 9.10pm on that night, outlining a six-month guarantee.

The report finds the failure of the banks was the responsibility of senior management in the institutions.

It is highly critical of the financial regulator and the Central Bank, insisting they had sufficient powers to intervene but did not use them.

The inquiry also found that breaches of prudential limits and requirements were identified, but no enforcement action was taken against institutions.

All the main political parties, whether in opposition or in government, were criticised for advocating pro-cyclical fiscal policies, including increasing expenditure and reducing taxation in the years leading up to the crisis.

Nine of the 11 committee members signed the final report.