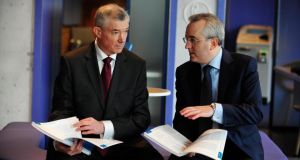 What a difference 12 months can make. After five years of morale-sapping losses since the financial crash here, rafts of loan impairments and provisions, and several rounds of cost cutting, Bank of Ireland recorded a solid pre-tax profit of €921 million for 2014.

This included “additional gains” of €516 million specific to last year, including an impairment reversal of €280 million relating to its Republic of Ireland mortgage book.

Nonetheless, the underlying business is once again in growth mode – new lending rose by 50 per cent to €10 billion – and chief executive Richie Boucher said it is on track to meet its lending target of €33 billion between 2013 and 2017.

The Irish economy is growing again and its partnership with the post office in Britain seems to be proceeding well. Staff expenses were flat last year at €823 million and a recent pay deal with unions gives it certainty on its cost base moving forward.

Defaulted loans fell by €2.8 billion in 2014 and are now €4 billion below the peak of June 2013. Boucher said the number of home repossessions this year will probably be higher than the near 200 in 2014 but this is still small in the overall context.

The bank’s arrears problem is easing and the re-default rate of those with an agreed solution is below 10 per cent.

Boucher expects Bank of Ireland to approve more home loans this year in spite of tougher Central Bank rules on loan-to-value ratios. It is also lending for housing construction again, albeit in a more measured way. Boucher said it’s been more about infill sites than speculative landbank development, which it won’t touch.

There are potential headwinds for the business. A continued recovery in the Irish economy is not a certainty and there is a political risk here now that we are effectively in an election year, with the Coalition struggling in the polls. Consumer demand remains muted.

The UK is also facing an election, with the very real possibility of a hung parliament and some horse trading between parties for power. Greece’s continued debt difficulties and the tensions between Ukraine and Russia raise question marks over economic growth across Europe and the knock-on impact it could have here.

Bank of Ireland is also required to repay €1.3 billion in preference shares to private investors by July 2016, which means a dividend payment to shareholders (the State still owns 14 per cent of the equity) is at least a couple of years off.

The Oireachtas banking inquiry is another potential fly in the ointment. Boucher has been summoned to appear in early May along with two former governors and his predecessor, Brian Goggin.

Ideally, the bank would prefer to concentrate on the future but politicians and the public want answers on the mistakes of the past. Boucher is sanguine about it all but there’s no doubt that this will be a distraction for the bank at a time when it should be focused on growth and dealing with legacy issues.

1 How much state pension will I get next year?
2 Oxford Covid vaccine trials offer hope for elderly
3 Tesco takes to the skies with home delivery by drone
4 Ulster Bank to introduce new card payment controls on app
5 Hurrah for the companies giving staff more time off
6 How long can Government afford to keep State pension age at 66?
7 Investors unnerved by Brexit, Covid-19 and US election jitters
8 ‘We lost money on our planned wedding in Spain. Covid saw to that’
9 Some Irish money market funds came close to danger in March
10 Apple planning updates to its AirPods earbuds next year
Real news has value SUBSCRIBE