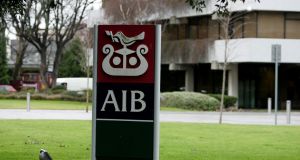 After a poor outturn in Friday’s European stress tests AIB stressed on Monday morning that the EBA figures are based on a “ 2015 static balance sheet and does not reflect current or future improved financial performance”. (Photograph: Cyril Byrne/The Irish Times)

The stress tests by the European Banking Authority (EBA) posed a question mark over both AIB’s and Bank of Ireland’s ability to absorb losses in the event of a prolonged economic downturn.

The EBA found that in an “adverse scenario” AIB’s capital ratio, which measures a bank’s equity against possible risks, such as borrowers failing to repay loans, fell below the level generally required by regulators and markets. The authority found AIB would have a Common Equity Tier 1 (CET1) ratio of 4.3 per cent at the end of 2018, below the 5.5 per cent typically required. This put the bank among the worst performers of 51 European banks.

In a statement Monday morning, the bank said that the EBA results “are point in time projections based on prescribed stress assumptions and should not be treated as indicative of the future financial performance of AIB”.

The bank stressed that the EBA figures are based on a “ 2015 static balance sheet and does not reflect current or future improved financial performance”.

The bank also noted that the overall EBA stress test result of 7.4 per cent is 0.5 per cent higher than the 2014 result, and that AIB is “well-capitalised and capital accretive”, noting that the bank’s reported capital position as at June 30th 2016 is a transitional CET1 ratio of 16.5 per cent and fully loaded CET1 ratio of 13.3 per cent.

Meanwhile the EBA found that in a similar adverse scenario, Bank of Ireland’s ratio would be 6.1 per cent in 2018.

Responding to Friday’s stress tests, Bank of Ireland said Monday morning that its capital position is “strong” and the group continues to organically generate capital, including 70bps on a transitional basis in the six months to June 2016.

“As previously stated, the group expects to maintain sufficient capital to meet, at a minimum, applicable regulatory capital requirements plus a management buffer,” the bank said.

Philip O’Sullivan, economist with Investec, noted that the EBA exercise does not incorporate a pass/fail threshold and instead is designed to be used as a piece of information for the 2016 round of the supervisory review and evaluation processes (SREP).

“Given the especially harsh assumptions around the Irish institutions that were incorporated within this mechanical exercise, we would caution against putting much weight on the Irish banks’ relative position within the sample universe and/or their absolute projected capital ratios,” he said.