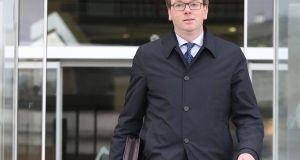 Witness Matt Moran at Dublin Circuit Criminal Court yesterday court where he was giving evidence in the trial of four former bankers who are accused of conspiring to mislead investors by using interbank loans to make Anglo appear €7.2 billion more valuable than it was. Photograph: Collins Courts

Anglo Irish Bank considered taking over or merging with Irish Life & Permanent at the height of the 2008 financial crisis, the trial of four bankers has heard.

The interbank loans allegedly involved money being transferred by Anglo to ILP and then being put back on deposit with Anglo via ILP’s life assurance division.

The transfer would allegedly appear as corporate deposits and not an interbank loan so the bank’s corporate funding figure would appear bigger for the bank’s year-end figures on September 30th, 2008.

ILP’s former director of finance, Peter Fitzpatrick (63) of Convent Lane, Portmarnock, Dublin; John Bowe (52) from Glasnevin, Dublin, who had been Anglo’s head of capital markets; Mr McAteer of Greenrath, Tipperary town, Co Tipperary; and Mr Casey from Raheny, Dublin have all pleaded not guilty at Dublin Circuit Criminal Court to conspiring together and with others to mislead investors through financial transactions between March 1st and September 30th, 2008.

At the beginning of week nine in the trial Matt Moran, Anglo’s chief financial officer at the time, told Paul O’Higgins SC, prosecuting, that he had been offered immunity from prosecution by the DPP for anything that might arise in relation to Anglo Irish Bank.

He said that throughout 2008 he was involved in an ongoing project entitled “Universe”, which was the potential merger of Anglo and Permanent TSB and ILP.

He testified that the potential acquisition of ILP would result in a more “universal bank” as Anglo was a more narrowly focused business bank than a “universal type bank”. Anglo didn’t lend money to people in the form of residential mortgages while ILP and Permanent TSB did.

Mr Moran said another project being examined by Anglo at this time was the idea of ILP providing mortgage funding to potential housebuyers who would buy from development sites being run and managed by Anglo’s developer clients.

He added that this would put liquidity back in to the housing market while not detracting liquidity from ILP.

He explained that when ILP issued a mortgage they were able to take that mortgage to the ECB and turn it into liquidity but a commercial bank like Anglo could not do this.

He said the project ultimately never happened as the mortgage transactions would be quite complex and there were so many other events happening at the time.

The witness said that in March 2008 he was asked by David Drumm, the bank’s then CEO, to contact Allied Irish Bank (AIB) to see if it would place a deposit with Anglo which “we [Anglo] would somehow fund”.

He said he had gotten to know John O’Donnell, then Group Finance Director of AIB and they discussed this. He said Mr O’Donnell came back to him and said the bank was “willing to look at it” but with a key condition that the Financial Regulator be informed.

Mr Moran said this referred to his colleague Matt Cullen and himself and to a later golf game with Mr O’Donnell.

Mr Moran said that in the summer of 2008 Mr Drumm began discussing a process of planning for their year end accounts in September.

In an email shown to the jury and dated July 28th, 2008 Mr Moran suggested: “It may be worth considering AIB again re depo [deposits] at y/e [year end]. Attitude is possibly more constructive in recent months...”

Mr Bowe replied: “Take care there Matt. The mere fact that we raise it after being turned down shows a weakness on our part that they would react to...if we can raise it in a very soft way…”.

Mr Moran then responded: “I agree with the caution and that it’s one we should only consider further down the line. My sense there is a softening. All parties were more constructive than I’ve ever seen.”

Mr Moran said that the merger would have created the third largest banking force in the State but it never came to fruition. The trial continues before Judge Martin Nolan and a jury.

1 Should my mam wait for house prices to drop before buying?
2 US ‘hard seltzer’ drink White Claw launches in Ireland
3 Citigroup warns that markets are out of step with reality
4 Chris Johns: Past is another country when it comes to our post-pandemic future
5 ‘I’m so lucky to be in the Caribbean – a million miles from Derry Girls’
6 ‘The recovery needs to be a full-scale economic renewal’
7 If you injure yourself working from home, is your employer responsible?
8 Michael Smurfit: ‘I asked Trump to invite me to the White House for my 80th birthday’
9 Household savings soar as consumers stop spending
10 Joint accounts: if one of us dies, can the other access the money?
Real news has value SUBSCRIBE