All loans in Nama will be repaid, Joe O’Reilly tells banking inquiry 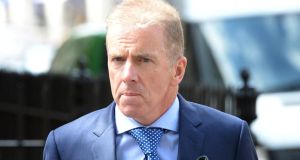 his personal and group loans, which total more than €2 billion, will be sold by Nama for a multiple of what the agency paid for them.

Mr O’Reilly told the banking inquiry he had personal and corporate loans totalling about €2 billion from the guaranteed banks in September 2008 and he believed all this money would be repaid.

He said he expected the principal of his personal and corporate loans to be fully repaid when the loans are sold as part of Nama’s so-called Project Jewel sale, currently under way.

Mr O’Reilly, founder of the Castlethorn group, of which he is one of three shareholders and of Chartered Land, which he wholly owns, said the groups’ loans were moved to Nama in 2010 and his businesses had since worked hard with the agency to maximise the value of the assets.

Joe Higgins TD said Mr O’Reilly had told the inquiry he was one of the State’s most successful residential home builders, yet he had more than €2 billion in loans transferred to Nama. “Are you in denial?” he asked him.

Mr Higgins asked if he could understand why the public might feel bitter about having had to bail out property developers and the banks.

Mr O’Reilly said that of course he did and he had worked hard to retrieve as much of the value of his groups’ assets as he could.

He said he had borrowed from the banks, not from the taxpayer, and it was not his decision to use public money to support the banks.

He said he had been in the property sector for more than 30 years. His Castlethorn group built 3,000 homes between 2001 and 2008, while Chartered Land owned some of the most prestigious retail assets in Dublin, including Dundrum Town Centre and 50 per cent of the Ilac Centre in Dublin and the Pavilions in Swords.

With the benefit of hindsight, he said, he regretted not foreseeing the banking and property sector collapses.

He told Michael McGrath of Fianna Fáil that by 2006 he was expecting an “adjustment” of approximately 20 per cent to 30 per cent in property prices, and not the collapse that occurred.

1 Should my mam wait for house prices to drop before buying?
2 Chris Johns: Past is another country when it comes to our post-pandemic future
3 Citigroup warns that markets are out of step with reality
4 Donohoe told insurers they risked ‘irreparable damage’ to reputation
5 ‘I’m so lucky to be in the Caribbean – a million miles from Derry Girls’
6 ‘The recovery needs to be a full-scale economic renewal’
7 US ‘hard seltzer’ drink White Claw launches in Ireland
8 People ‘overloaded’ by social media more likely to believe false stories
9 Michael Smurfit: ‘I asked Trump to invite me to the White House for my 80th birthday’
10 Elon Musk’s Starlink could take wonders of night sky away from us
Real news has value SUBSCRIBE