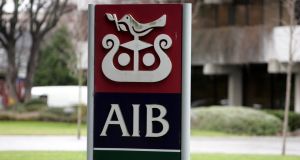 Despite having a smaller loan book than Bank of Ireland, AIB issued over 50 per cent more High Court summary judgment actions against borrowers last year compared with its main rival. Photograph: Cyril Byrne

State-owned AIB was by far the most aggressive Irish bank of 2015 in terms of chasing customers through the courts for alleged unpaid debts, according to an Irish Times analysis of court records.

Despite having a smaller loan book than Bank of Ireland, AIB issued over 50 per cent more High Court summary judgment actions against borrowers last year compared with its main rival.

Summary judgments – where banks apply for fast-track rulings without a trial or hearing a defence – are considered a hawkish debt recovery tactic. Banks have previously been criticised by Edmund Honohan, the master of the High Court, for the volume of such cases and their fairness on distressed borrowers.

AIB was responsible for more than a third of all such summary applications in the State last year.

Bank of Ireland is far more likely than AIB to resort to the courts in pursuit of debts owed by homeowners, however. More than half of all Bank of Ireland’s summary applications were made in the name of its mortgage bank, compared with just over a quarter for AIB, which prefers to use the tactic against commercial borrowers.

AIB said “in all cases, the bank seeks a non-legal resolution and implementation of a consensual debt restructuring with borrowers”. It added it only resorts to the courts “where a borrower does not engage fully”.

Bank of Ireland defended its heavy use of summary applications by pointing out that its proportion of home loans in arrears is lower than the industry average. It said it only uses the tactic against delinquent borrowers who it determines can pay their loan, but don’t.

“Legal proceedings are only ever taken as a last resort after all efforts to agree alternative repayment plans with borrowers have been exhausted,” said Bank of Ireland.

After the two pillar banks, the next most aggressive in terms of summary applications is Danske, which is running down its Irish loan book. State owned Permanent TSB only sought one summary judgment against a borrower in 2015.

Buyers of books of distressed Irish loans, such as Stapleford Finance, were also prominent users of the tactic. Nama also pursued about 15 borrowers in this way last year.

Among borrowers to have faced summary judgment applications last year were Independent TD Mick Wallace, who is being pursued by Cerberus for more than €2 million.

The analysis shows that the volume of debt-related summary applications nationally in 2015 returned to pre-crisis levels. The approximately 2,300 applications in 2015 was roughly similar to the number filed in 2007. The number of applications spiked sharply as the economy deteriorated during the crash, peaking at more than 6,100 in 2010.

Mr Honohan, a brother of recently-retired former Central Bank governor Patrick Honohan, wrote in 2014 that summary applications that people should be concerned at the volume of such applications.

He questioned whether summary judgments were fair on borrowers, and suggested the procedure is sometimes “plaintiff favoured”.

Barrister Venetia Taylor recently represented a couple who reversed a summary judgment against them in favour of Ulster Bank, on the grounds they had been denied the right to present a proper defence.

1 Who are Ireland’s 17 billionaires?
2 Are there annual limits on inheritances or gifts to a child?
3 Fianna Fáil may have just pressed the pause button on the property market
4 UK to prioritise EU trade deal over one with United States
5 O’Flynn ‘very unhappy’ with extra payments to former employee, court hears
6 My father in a nursing home wants to gift me his house
7 Eason puts Blanchardstown store on market at €16m
8 IDA chief says State could soon ‘be fighting for a smaller pool’ of foreign investment
9 Mixed-use investment in Greystones town centre guiding €5.5m
10 Dunnes premature in challenging Point Village resolution move, Supreme Court finds
Real news has value SUBSCRIBE