A dynasty relishes the human touch beneath family business 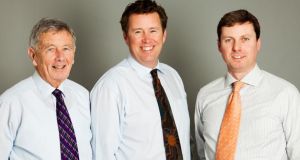 Ciaran Sheridan (centre) with his father Paddy and brother Donagh: “Why do people come back to us? It’s because our staff know our customers’ names.”

Insurance may be many things but, as Ciaran Sheridan is the first to admit, it’s not the sexiest of industries. Nonetheless, it has provided a living for his father, his brother and himself for many years and he’s confident it will continue to do so.

Founded in 1964 by Ciaran’s father, Paddy, Sheridan Insurances provides independent advice on a full range of personal, business and financial services. The family firm has expanded over the years from a small office with three employees on Wexford’s North Main Street to become one of the southeast’s largest insurance brokers with 55 staff spread across three locations: Wexford, Kilkenny and New Ross.

It hasn’t been plain sailing all the way. Having come through a number of recessions relatively unscathed, it recently experienced one of its most difficult moments following the collapse of Setanta Insurance. “It’s going to cost the business a lot of money this year, but we’ll be okay,” admits Ciaran (52).

Up to 75,000 Irish drivers were left at risk after the Dublin-based insurer went into liquidation in April. For brokers such as Sheridan Insurances, it meant many extra hours working to ensure policyholders had alternative cover options.

“We had many thousands of customers with them and obviously most were very upset at having to take out policies all over again,” said Ciaran.

“It also had a big impact on staff. When something big like that occurs, it can make them start to worry about their jobs. So, after having to spend quite a bit of time reassuring customers that everything was alright, I had to do the same then with our employees,” he said.

Despite this recent road-bump, Sheridan Insurances continues to thrive. Ciaran believes the firm’s dedication to customer service is why it has stayed in business for more than 50 years.

“It’s hard to be unique in this business because if there’s a new product brought out, someone else can easily mimic it the next day. It’s very much a ‘me too’ business. You have to try to differentiate yourself by how you communicate with customers.

“In all honesty, the business is boring and the fundamentals of what we do haven’t changed dramatically over the years. The communications piece is vitally important in helping you to stand out,” he said.

As well as winning awards for use of social media to engage customers, the company has bucked the trend for switching to faceless call-centre-hosted customer interactions by retaining locally based staff, each of whom has a bank of clients.

“Why do people come back to us? It’s because our staff know our customers’ names. Our clients have personal advisers and, while it can be a nightmare managing the service, our customers like it and our staff like it because they enjoy having the responsibility of minding clients,” said Ciaran.

While the business has turned into something of a dynasty, with Ciaran managing director of the group and younger brother Donagh (42) having set up the Kilkenny office in 1997, there were no plans for this to happen. In fact, Ciaran was carving out a successful career on the other side of the world when his father asked him to join back in 1990.

From pigs to people

Having gone to agricultural college and run his own pig farm for a few years, Ciaran decided to head to Australia in the late 1980s, when he realised the pig farm sums didn’t add up.

While down under, he ended up working as a rep for a veterinary pharmaceutical company, met a local woman who would end up his wife and had got his residency so had no immediate plans to return home.

“My father got in contact after buying another business. He told me the company was growing and that he would need someone to help him run it. He felt that whoever he got in would want a slice of the action so he asked if it was something that might interest me.

“It was only when I had started farming that I’d realised how much I liked working with people and so to get the opportunity to join a business that was customer-focused and growing seemed like a great idea. I headed back with my fiancée and became the company’s ninth employee,” Ciaran added.

Given his initial reluctance to get involved in the family firm, Ciaran is surprised at how much he has come to like working with his father and brother. With Paddy (86) still taking an active role in the company, it seems as though the Sheridans will be staying in the world of insurance for many years to come. Or will they?

“My kids are teenagers and Donagh’s are only young so it’s hard to know whether they’ll end up involved in the firm. My 18-year-old daughter gets dragged into work here sometimes and she says it’s boring as hell. But that attitude may well change though when she’s older and has bills to pay.”