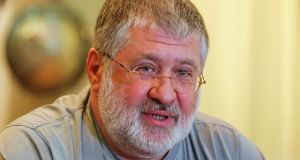 Igor Kolomoisky, billionaire and governor of the Dnipropetrovsk region: legal dispute in London involving three of Ukraine’s richest men was settled out of court on Friday. Photograph: Valentyn Ogirenko/Reuters

A $2 billion (€1.85 billion) legal dispute involving three of Ukraine’s wealthiest and most powerful oligarchs and centring on wealth amassed after the collapse of the Soviet Union has settled on the eve of trial.

The High Court case would have pitted Victor Pinchuk (pictured), one of Ukraine’s richest and most internationally connected businessmen who numbers Tony Blair and Elton John among his contacts, against Gennadiy Bogolyubov and Igor Kolomoisky, a billionaire former regional governor of Ukraine. The three were in dispute over ownership of a Ukrainian iron ore mine, KZhRK, part of a state-owned conglomerate known as Ukrrudprom sold off in 2004.

The hard-fought case was being closely watched amid concern it could set a precedent for disputes over further assets. It would also have given a glimpse into what has been described as the “rough and tumble” politics of Ukraine at the time.