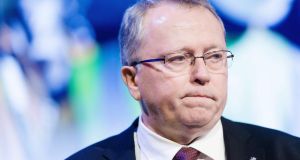 Eldar Saetre, acting chief executive officer of Statoil ASA. Norwegian companies including Statoil ASA and global behemoths with Norwegian units, such as ConocoPhillips, are gearing up for the biggest investment cuts the Nordic nation has seen since 2000. (Photographr: Krister Soerboe/Bloomberg)

When Joergen Langaunet started as a project planner at offshore engineer Aker Solutions ASA in 2012, he worked a lot of overtime.

Norway’s oil industry, so rich it spawned the world’s largest sovereign wealth fund, was booming. Then last year, he realised he was spending most of his time in the lunch room: His services weren’t needed. In September, as crude prices were on their way to the biggest plunge since 2008, Langaunet lost his job. Today he’s a regional manager for Tine SA, Norway’s biggest dairy producer.

“Our office went through two rounds of downsizing, so you start to see the picture when people have to leave and no matter how many people leave, there’s still less and less work to do,” the 29-year-old said by phone from Trondheim, Norway.

Norwegian companies including Statoil ASA and global behemoths with Norwegian units, such as ConocoPhillips, are gearing up for the biggest investment cuts the Nordic nation has seen since 2000. As many as 40,000 jobs could disappear out of about 250,000 nationwide. Oil workers made on average almost 60 per cent more than other industrial workers, and a survey from recruitment firm Hays Inc. showed salaries in the industry were in the top two worldwide over the past five years. The 50 per cent slump in oil prices since June is threatening projects worldwide. Spending cuts will reach 20 per cent this year and 10 per cent in 2016, Danske Bank A/S says.

Already, Russia is on the brink of a recession and job creation is slowing in Texas, where the shale boom revived the economy over the past decade. More than 30,000 oil-industry workers have been let go globally, according to a Bloomberg News tally. In Norway, western Europe’s top oil producer, the Petroleum Directorate expects offshore investments will fall 15 percent this year as maintenance and upgrades and exploration are cut back. It’s a sharp reversal after a four-fold increase in oil prices and offshore investment in the 12 years ended in 2013.

“The effect on the Norwegian oil and gas industry could be pretty brutal,” said Sveinung Fjose, managing partner at Menon Business Economics AS. The Oslo-based consulting firm predicts as many as 30,000 more oil jobs may disappear by the end of the year on top of the 10,000-plus announced already. Statoil Cuts Statoil last week said it will deepen cost cuts by 30 per cent and lower planned investment by 10 per cent. That will put even more pressure on Norwegian service and equipment suppliers, said Petroleum and Energy Minister Tord Lien.

“It’s too early to say how big the impact will be,” he said in an interview in Stavanger today. “The situation is dramatic,” said Staale Kyllingstad, chief executive officer of IKM Gruppen AS. His company, a service supplier to the oil industry, has cut 40 jobs and “may have to cut more,” he said.

The industry’s struggles are rippling through the Nordic country’s economy, where petroleum accounts for more than one fifth of gross domestic product. In December, the central bank, which had been keeping rates up to guard against a housing bubble, eased its benchmark for the first time in more than two years and said there was a 50-50 chance for another reduction as soon as March. Prime Minister Erna Solberg said last month that the government is now “on alert” to provide stimulus if necessary.

The country’s sovereign wealth fund, worth $860 billion, is available to plug budget deficits.

As current employees lose their jobs, prospective oil industry workers are for now finding that career path closed. At Bergen University College, engineering students who used to interview with eager oil-company recruiters during breaks between classes, are being forced to change their plans. “I was promised gold and riches,” said Safina de Klerk, a 21-year-old in her third year of engineering studies in Norway’s second-biggest city. “We were caught off guard, but we should actually have seen this coming. The investments in the oil industry have been ridiculous.”

De Klerk said she may now have to prolong her studies instead of starting work. While unemployment in Norway remains less than 4 per cent, job losses are accelerating. In the Rogaland region, home to the oil capital, Stavanger, the number of unemployed increased by 29 per cent in January from a year earlier as companies such as Statoil, Baker Hughes Inc. and Transocean Ltd. cut thousands of jobs, according to the Norwegian Labor and Welfare Administration.

The cuts by Statoil, the state-controlled operator of more than 70 per cent of Norway’s oil and gas production, have been especially painful. Statoil is the biggest client of companies such as Aker Solutions, which has cut more than 500 jobs in maintenance and modifications. Almost all workers opted to transfer to in-house employment agency Frontica Advantage. “We’ve done our utmost to avoid dismissals and take care of our staff,” said spokeswoman Bunny Nooryani. “So far, about 40 per cent of those transferred to Frontica have got new work either with Aker Solutions or another company.” Krystian Wichrowski, a piping engineer, lost his job at about the same time as Langaunet.

The 33-year-old from Poland first noticed Aker Solutions was trimming costs across the board, clamping down on travel and overtime. He thought he was safe after his name was left out of a first wave of job cuts, then he got the phone call telling him he was being let go.

“It was like lightning from the sky,” he said. Wichrowski quickly found his bearings after transferring to Frontica, landing a new job at PTC AS, a Stavanger-based oil- service company. That’s good news for Solberg, who has said one of her main challenges will be to make sure Norway can deal with the “new normal” gripping the oil industry.

On top of falling prices, Norway has also seen crude production slump 50 per cent since early last decade as deposits dwindle. Yet the country also has in store its biggest offshore project in decades, the Johan Sverdrup field in the North Sea, which holds as much as 2.9 billion barrels of oil.

Due to start production in 2019, the field is deemed profitable even at sub- $40 oil prices. It’s expected to cost 100 billion to 120 billion kroner and generate as many as 51,000 man-years of employment for Norwegian deliveries in its first phase, according to Statoil.

Aker Solutions and Kvaerner ASA in January secured contracts worth 6.5 billion kroner for engineering services and part of the platforms. Sverdrup is the “bright spot” in the crisis, said Muhammad Yasser Haddad, 23, who studies petroleum technology at the University of Stavanger. He’s well aware that the industry he plans to join after graduating in 2017 is now facing different challenges. “It needs to be sustainable,” he said. “It’s possible that the wage increases will slow down, that there will be fewer benefits.” Wages in Norway’s oil industry won’t keep growing as they have, Menon’s Fjose said. Monthly salaries jumped 62 per cent from 2002 to 2013, compared to 56 percent for Norwegian workers as a whole, according to Bloomberg calculations based on figures from Statistics Norway.

Engineers, some of the industry’s best paid, will probably see their wages “stagnate,” partly because dismissed workers will seek employment in the public sector, where raises are smaller, said Trond Markussen, head of the Norwegian Society of Engineers and Technologists. Langaunet, who now heads a team of 25 people that advises farmers on dairy production, said he’s still optimistic about the oil industry. While his new job has been an important career step -- with more responsibility and more pay -- he doesn’t exclude returning to the oil industry -- even to Aker Solutions. “I don’t think the world is ready to let go of oil just yet,” he said. “We’ll continue to rely on oil for some time to come.”