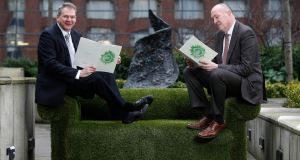 Environmental services group Veolia expects to create 300 jobs across its Irish business over the next five years.

The French-owned company supplies a range of water, waste and energy management services to commercial and public entities, including Irish Water.

Demand for its services has grown in tandem with the shift towards a low-carbon economy, which is expected to accelerate in the wake of the recent global agreement on climate change.

Veolia said it was poised for expansion in the Irish market and was targeting double-digit growth annually over the next five years.

The new roles would be across all divisions, with water infrastructure and biomass energy the main growth areas.

The facility will generate up to 42.5 megawatts of electricity – enough to power 68,000 homes – when it opens in 2017, accounting for 6 per cent of Ireland’s renewable energy needs.

Ireland’s 2020 renewable energy targets commit the State to sourcing 40 per cent of its electricity needs from renewables, such as biomass.

Veolia said 40 new staff would be taken on this year to work on the Killala plant. It expects to hire a further 150 over the next two years to work on several projects with Irish Water.

“As we transition to a low-carbon economy, it is imperative that companies can access environmentally sustainable solutions,” Veolia Ireland county manager Pat Gilroy said.

“We are setting out to do just that, providing businesses in Ireland with the means to manage their resource needs more efficiently and grow with us in a circular economy.”

Mr Gilroy said highlighted a recent Veolia report, which suggested that adopting “circular principles” – essentially making better use of resources and waste products – could contribute €1.65 billion in value to the economy and create as many as 5,000 jobs over 10 years.

In 2012, Veolia’s parent group announced a major restructuring of its business, shrinking its global footprint by pulling out of half of the 77 countries in which it operates.

It also announced it would divest itself of its transport businesses to concentrate on its core divisions of water, waste and energy. The Irish arm, however, still maintains a stake in Luas operator Transdev.

Last year, the Paris-listed company recorded a consolidated revenue of €24.4 billion in 2014. Its Irish business generated sales worth about €122 million, with more than 80 per cent coming from its dominant water and energy segments.

UK house price growth picked up unexpectedly in February 08:11
Zoom shares rise on strong current-quarter forecast 08:11
Volvo to sell electric cars only by 2030, company says 07:50
Dalata posts loss of €112m due to Covid hit as Pat McCann to step down as CEO 07:49
Flutter’s revenues rise but profits down due to charge related to Stars deal 07:32