When it comes to the main obstacle remaining to more or less universal health coverage, rhetoric is all the right has 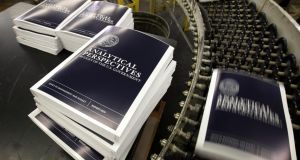 President Barack Obama will soon release a new budget, and the commentary is already flowing fast and furious. Progressives are angry (with good reason) over proposed cuts to social security; conservatives are denouncing the call for more revenues. But it’s all Kabuki. Since House Republicans will block anything Obama proposes, his budget is best seen not as policy but as positioning, an attempt to gain praise from “centrist” pundits.

No, the real policy action at this point is in the states where the question is: How many Americans will be denied essential healthcare in the name of freedom?

I’m referring, of course, to the question of how many Republican governors will reject the Medicaid expansion that is a key part of Obamacare. What does that have to do with freedom? In reality, nothing. But when it comes to politics, it’s a different story.

It goes without saying that Republicans oppose any expansion of programmes that help the less fortunate – along with tax cuts for the wealthy, such opposition is pretty much what defines modern conservatism. But they seem to be having more trouble than in the past defending their opposition without simply coming across as big meanies.

Specifically, the time-honored practice of attacking beneficiaries of government programmes as undeserving malingerers doesn’t play the way it used to. When Ronald Reagan spoke about welfare queens driving Cadillacs, it resonated with many voters. When Mitt Romney was caught on tape sneering at the 47 per cent, not so much.


The ‘defence of freedom’ lie
There is, however, an alternative. From the enthusiastic reception American conservatives gave Friedrich Hayek’s “Road to Serfdom,” to Reagan, to the governors now standing in the way of Medicaid expansion, the US right has sought to portray its position not as a matter of comforting the comfortable while afflicting the afflicted, but as a courageous defense of freedom.

Conservatives love, for example, to quote from a stirring speech Reagan gave in 1961, in which he warned of a grim future unless patriots took a stand. (Liz Cheney used it in a Wall Street Journal op-ed article just a few days ago.) “If you and I don’t do this,” Reagan declared “then you and I may well spend our sunset years telling our children and our children’s children what it once was like in America when men were free.”

What you might not guess from the lofty language is that “this” – the heroic act Reagan was calling on his listeners to perform – was a concerted effort to block the enactment of Medicare.


Obamacare opposition
These days, conservatives make very similar arguments against Obamacare. For example, Senator Ron Johnson of Wisconsin has called it the “greatest assault on freedom in our lifetime”. And this kind of rhetoric matters, because when it comes to the main obstacle now remaining to more or less universal health coverage – the reluctance of Republican governors to allow the Medicaid expansion that is a key part of reform – it’s pretty much all the right has.

As I’ve already suggested, the old trick of blaming the needy for their need doesn’t seem to play the way it used to, and especially not on healthcare: perhaps because the experience of losing insurance is so common, Medicaid enjoys remarkably strong public support. And now that health reform is the law of the land, the economic and fiscal case for individual states to accept Medicaid expansion is overwhelming. That’s why business interests strongly support expansion just about everywhere – even in Texas. But such practical concerns can be set aside if you can successfully argue that insurance is slavery.

Of course, it isn’t. In fact, it’s hard to think of a proposition that has been more thoroughly refuted by history than the notion that social insurance undermines a free society. Almost 70 years have passed since Friedrich Hayek predicted (or at any rate was understood by his admirers to predict) that Britain’s welfare state would put the nation on the slippery slope to Stalinism; 45 years have passed since Medicare went into effect; as far as most of us can tell, freedom hasn’t died on either side of the Atlantic.

In fact, the real, lived experience of Obamacare is likely to be one of significantly increased individual freedom. For all our talk of being the land of liberty, those holding one of the dwindling number of jobs that carry decent health benefits often feel anything but free, knowing that if they leave or lose their job, for whatever reason, they may not be able to regain the coverage they need. Over time, as people come to realise that affordable coverage is now guaranteed, it will have a powerful liberating effect.

But what we still don’t know is how many Americans will be denied that kind of liberation – a denial all the crueler because it will be imposed in the name of freedom.