Who owes more money - the Irish or the Greeks?

With government debt per head of $60,000, the Irish carry the second largest debt burden in the world behind Japan – but ahead of Greece 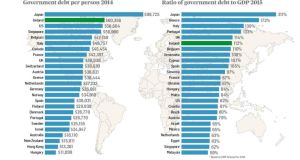 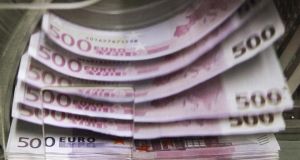 Greece may be dominating headlines with its ongoing negotiations on debt repayments to the International Monetary Fund (IMF), but Ireland’s own debt problem, while shrinking, is still significant.

Figures from Bloomberg and based on GDP growth forecasts for 2015, put Ireland in seventh position in the world in terms of the debt to GDP ratio, a measure of a country’s debt compared to its economic output.

Japan is the world’s most indebted country, with total outstanding debt of $8.9 trillion, and a GDP ratio of 211 per cent.

Unsurprisingly, Greece is in second place in the world, with outstanding debt of €358 billion and a debt-to-GDP ratio of 172.9 per cent, followed by Lebanon (154.9 per cent) in third.

There is good news however. On an estimated basis, from 2013-2018, Bloomberg figures show that Ireland’s debt-to-GDP ratio will fall by 13.5 percentage points, second only to Greece (-33.1 percentage points).