What does Brexit mean for Irish manufacturers’ domestic sales?

Exporters are affected by sterling’s dramatic fall, but so are sales into the local market 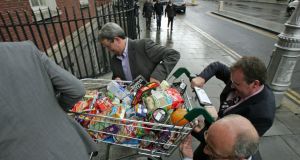 Members take a trolley of food back into the Merrion Hotel after the launch in Dublin in 2009 of the Love Irish Food organisation, established to promote Irish food and drink brands to consumers. Photograph: Frank Miller

Much has been written about the impact on Irish exporters into the British market of the Brexit decision, which induced a dramatic and rapid fall in the value of sterling. Less debate has taken place about the impact on the competitiveness of local Irish manufacturers versus imported products on the domestic Irish market.

Of all packaged consumer foods sold in retailers in Ireland, less than 40 per cent is produced in Ireland. In some product categories imports totally dominate. Ninety-nine per cent of biscuits are imported – €5 million is spent by Irish consumers every week on imported biscuits; €500 million (at wholesale prices) worth of dairy products are imported every year, including €200 million of milk (mainly from the North). Ireland is the UK’s number one export market for food and drink, including many leading brands and retailer private labels in large product categories such as cereals, chocolate and sugar confectionery, and sauces. Together these products account for €700 million of imports every year from the UK alone.

For our food sector in general, international trade is crucial. We export 90 per cent of all food and drink produced in Ireland: exporting is good for our economy. So we obviously don’t want to see any barriers to such international trade, and maintaining open trading borders is an important objective. However, for Irish packaged food businesses, having a strong local domestic presence is a vital foundation for brand building. I cannot think of one strong exporting food brand that does not have a secure domestic base. Having a greater share of our own domestic market is a vital stepping stone on the journey towards a global presence for Irish food brands.

In that context, the enhancement of the cost competitiveness of imported brands as a result of the recent currency shift, is a worrying development. Imported brands, benefiting from a more favourable exchange rate, will either reduce prices or build a war-chest that can be used on heavier promotion and brand investment. In time this advantage will be eroded through cost increases in British manufacturers, as imported ingredients and commodities inflate in line with the falling value of sterling, but a gap will still remain.

In response, Irish producers seek to minimise the damage through cost reductions of sterling-based sourced ingredients and other input costs. For Irish brands aiming to maximise the use of Irish ingredients, this mitigating action will have limited benefit. Further investment in lean manufacturing techniques and cost reducing capital investments will be made by some businesses, to drive out any remaining fat in the supply chain. Redoubling innovation efforts, ensuring that the food products on offer to the retailers and consumers have real differentiation from the basic generic imported products, is a now an even more crucial part of the Irish manufacturers tool kit.

Retailers and consumers both have a role to play. In these increasingly competitive times following the Brexit decision, food retailers can take a further step towards providing support for Irish brands. Some leading grocery retailers have rightly identified the potential positive impact of being seen by Irish consumers as a committed and vocal supporter of Irish food. The Irish consumer decision on where to shop is influenced by their perception that the retailer has a genuine commitment to local sourcing.

Irish food producers have come together under the ‘Love Irish Food’ banner to drive home the message that Irish food and drink is of outstanding quality, and that a decision to switch to a genuinely Irish produced brand has a direct positive impact on economic growth, particularly on the provision of local jobs.

Most Irish consumers get it, and make a real effort to support locally produced brands. Recent research suggests that 87 per cent of grocery shoppers actively attempt to buy Irish alternatives. Some consumers however seem to miss the point, happily purchasing brands imported by multinationals, even though local brands of outstanding quality at competitive prices are on the shelves. Some Irish food shoppers will, in the coming weeks of increased grocery spending, drive north to take advantage of the weaker sterling rates, to buy their food and drink in retailers over the border. (During the last currency crisis for Irish food producers, Sainsbury’s Newry outlet was reported to have reached 3 per cent market share of the total Irish grocery market value.) It has been suggested by the economist Jim Power, chairman of Love Irish Food, that these consumers should carefully bank the savings made and keep them so that they can buy flight tickets to visit their children in Perth who have been forced to emigrate to find jobs.

During the coming months of intensified price competition from lower priced imports, Irish food brand loyalty will be tested.