View from the outside: how international bond market investors see Ireland’s recovery 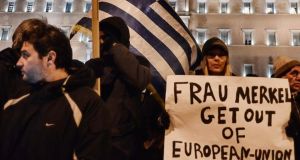 The relative lack of contagion to other stricken countries over turmoil in Greece demonstrates that once-potent vectors of crisis have been blunted. Photograph: Milos Bicanski/Getty Images

Ireland has started 2015 in impressive fashion on global debt markets, taking benefit from super-low interest costs and selling a 30-year bond for the first time. But what lies behind the positive investor sentiment – and can it last?

The forces at work are both international and local, say bond market participants in London, the United States, Dublin and mainland Europe. In discussion on Ireland, interest centres on the fiscal stance, the banks and, increasingly, on the general election to come. While there is quiet talk about the advance of Sinn Féin, this is far from the dominant theme.

“From a credit angle, it’s not really a big issue for us,” says Thomas Wacker, Zurich-based head of research in the wealth management unit of UBS. “The bottom line we’re focused on is the fiscal correction. For us the important point is to stay on the consolidation path.”

Towering over the panorama is imminent quantitative easing by the European Central Bank, which provides comfort to investors that the institution really will do whatever is required to prod the stagnant economy into life.

Although the return of turmoil over Greece has raised yet more questions about its membership of the single currency, the relative lack of contagion to other stricken countries thus far demonstrates that once-potent vectors of crisis have been blunted.

“If this would have happened to Greece two years ago when Ireland was in a much worse situation, Ireland would have been completely toast,” says a London-based banker who keeps close watch on the situation here.

Back then, Ireland was still in the grip of the EU-International Monetary Fund rescue programme and aligned in the perception of investors with fellow bailout recipient Portugal, euro zone bank aid recipient Spain and debt-swollen Italy.

In early 2014, Ireland made a smooth return to market financing, without a financial safety net from international sponsors. Investors have been encouraged since then by the uptick in growth, continued progress in budget-deficit reduction and the steady – if slow – turnaround of the surviving Irish banks.

The outwork is a marked decline in Irish borrowing costs, which provides the truest measure of investor sentiment at any time. Having reached stratospheric levels in the chaotic lead-in to the bailout and its tumultuous aftermath, the yield on some Irish debt is so low right now that certain investors won’t buy it.

The annual interest rate Ireland currently pays to borrow over 10 years is about 1 per cent. This compares with some 1.65 per cent for both Spain and Italy and 2.35 per cent for Portugal. Market participants say Ireland has decoupled from these countries, but they are divided as to where Ireland now stands.

The London banker argues that it is not too great a stretch to say Ireland is closer these days to “semi-core” euro zone countries such as Belgium, which can borrow over 10 years at about 0.72 per cent, and others like France, which borrows at about 0.69 per cent.

“Ireland is decidedly closer to Belgium and France than it is to Spain, Italy. It is also edging closer to Germany [and the] Netherlands,” the banker says.

“What is core/semi-core/periphery is, of course, up for argument but I would say that Germany, Netherlands are core, Belgium, France semi-core and Italy, Spain periphery. Ireland is, as the picture shows, somewhere between semi-core and periphery, but definitely on its way towards semi-core.”

But Wacker of UBS says there’s “still a bit of a gap to beat” before Ireland fits a seat in the “semi-core” lounge.

“The peer group I’m looking at for Ireland includes countries like Latvia and Slovakia, the single-A peer group. From an economic profile point of view, they’re more comparable than Italy and Spain.”

A US-based investor agrees, saying Ireland’s position right now resembles Baltic and central European members of the zone. In the Baltic case, similarities are noted in respect of strong budget consolidation over several years, a big recovery in activity, the pursuit of foreign direct investment and the openness of the economies in question.

For all that, market participants maintain close watch on Greece. In spite of whispered claims in Berlin that Europe’s anti-crisis “firewall” is strong enough now for other countries safely to withstand a Greek exit, people in the sovereign bond world are sceptical. “I think if Greece leaves, we have a problem. The euro zone has a problem no matter what,” says the US-based investor.

Wacker agrees. “Given the current status and our expected outcome for Greece, there’s very little contagion. It’s very different from the contagion channel a couple of years ago. In case of a euro exit, which we only see as a lower-probability risk case, contagion would likely be very material, despite quantitative easing in place.”

“In terms of what investors are interested in, they are interested in the wider consequences of the Greek elections. Those questions are coming up,” says Dermot O’Leary, chief economist at Goodbody stockbrokers in Dublin. “But I have to say it may be because investors haven’t looked into it in enough detail. There’s not a great deal of concern about it, but there is some momentum behind the issue coming.”

Wacker said such considerations probably lie behind Europe’s heard line with Greece. “It’s an important signal for Ireland and Spain that there is no easy way out,” he says.

Within this context, uncertainty over the outlook for the Irish election inevitably surfaces . “In Ireland specifically, you have to be cognisant of the political issue,” says Patrick Campbell, London-based analyst with Eaton Vance International, a big investment manager.

“Given where things stand now, there’s not a lot of risk domestically on the economic and fiscal side. On the political side, things are more interesting for the first time in a while.”

Citing Sinn Féin’s long history, Campbell notes that polls suggest the party is gaining support. “Most of their policies are not very investor-friendly, but it’s still early days so we don’t have a coherent platform,” he says.

Yet how real are these concerns?

“It’s not a huge concern now. But given the rise of anti-austerity and far-left or far-right parties in other countries, you have to be concerned, especially with the risk/reward of Irish debt: you’re not paid for any additional risk.”

The US investor raises similar issues. “If we’re going to get a Sinn Féin government in Ireland then I think markets have no choice but to reassess. What does reassess mean? Does an Irish bond yield at 1.01 per cent accurately capture risk? I would argue no.”

“We do not believe there are likely political scenarios that could lead to such policies – even those including left-leaning parties that would inevitably have to enter a coalition government,” says Mac Coille.

“Here Sinn Féin’s record in Northern Ireland is instructive – implementing a programme of public expenditure and social welfare cuts, with public sector employment set to fall by 9.5 per cent over the next four years in return for powers to set an independent corporation tax rate from the rest of the UK.”

According to the London banker, who has frequent discussions with pension funds and other institutional investors, the Irish election question centres on the need for the next administration to maintain order in the public finances. “Are the measures done going to be relaxed? Are we going to back to where we were before the crisis or keep doing the homework?”

“The impression was that there was a minimum threshold: if you just get one seat, you wouldn’t get that seat. That’s something that people were a little surprised about.”

There is, too, the question of Ireland’s banks. On this front, the London banker cites a “two-way” set of anxieties among investors. They’re concerned that access to credit is constrained at one level, but wouldn’t be too happy if credit was abundant. The high proportion of non-performing loans remains a concern, as are – in some quarters – the high interest margins on variable rate mortgages.

“The spreads that the banks take out are quite high. They still need to build up margins. People are concerned that that’s a drag on the economy.”

By the same token, the US investor points out that Ireland’s banking system is much smaller now than at the outset of crisis. Non-resident deposits reached €625 billion at their peak in November 2008 and fell by almost €200 billion as Ireland hurtled towards the bailout in 2010.

Such deposits now stand at just under €200 billion, meaning Ireland’s banks are less vulnerable to shock.